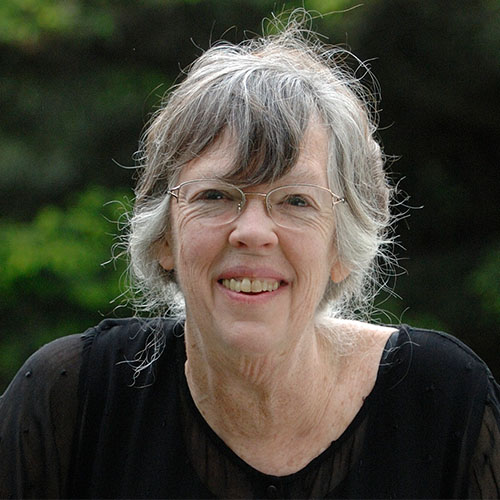 Poet, translator, scholar and activist Eleanor Wilner has received many honors, including a MacArthur Foundation Fellowship (1991-1996). Her fifth and most recent collection, Reversing the Spell: New and Selected Poems, is a remarkable rewriting of the myths of life and art by one of the most vital and original voices in American poetry. Wilner’s work is far-ranging and widely anthologized, and she has participated in a number of multi-disciplinary collaborations in dance and theater.

On the faculty of the MFA Program at Warren Wilson College since 1989, Wilner makes her home in Philadelphia, though she has been Visiting Writer in Hawaii, Iowa, and Japan, and was the Grace Hazard Conkling Writer-in-Residence at Smith College for 2004-2005.

There are always, in each of us,
these two: the one who stays,
the one who goes away –
Charlotte, who stayed in the rectory
and helped her sisters die in England;
Mary Taylor who went off to Australia
and set up shop with a woman friend.
“Charlotte,” Mary said to her, “you are all
like potatoes growing in the dark.”
And Charlotte got a plaque in Westminster
Abbey; Mary we get a glimpse of
for a moment, waving her kerchief
on the packet boat, and disappearing.
No pseudonym for her, and nothing
left behind, no trace
but a wide wake closing.

Charlotte stayed, and paid and paid –
the little governess with the ungovernable
heart, that she put on the altar.
She paid the long indemnity of all
who work for what will never wish them well,
who never set a limit to what’s owed
and cannot risk foreclosure. So London
gave her fame, though it could never
sit comfortably with her at dinner –
how intensity palls when it is
plain and small and has no fortune.

When she died with her unborn child
the stars turned east
to shine in the gum trees of Australia,
watching over what has sidetracked evolution,
where Mary Taylor lived
to a great old age, Charlotte’s letters in a box
beside her bed, to keep her anger hot.

God bless us everyone until we sicken, until
the soul is like a little child
stricken in its corner by the wall; so there is
one who always sits there under lamplight
writing, staying on, and one
who walks the strange hills of Australia,
far too defiant of convention for the novels
drawn daily from the pen’s “if only” –
if only Emily had lived,
if only they’d had money, if only
there had been a man who’d loved them truly …
when all the time there had been
Mary Taylor, whom no one would remember
except she had a famous friend named Charlotte
with whom she was so loving-angry,
who up and left to take her chances
in that godforsaken outpost past
the reach of fantasy, or fiction.

Her Body is Private

in spite of all
the sweet inducements to disrobe
in the public eye, to sunbathe
in the hot glow of the spotlight (not be
forgotten for a minute, maybe two);
in spite of all
the cash that flows to those
who wear their heart, not on their sleeve
in that old innocence, but on their naked
wrist, or butt, like a tattoo;
in spite of all
emoluments, of shrinks who swear
that secrets eat the lining from the guts
and that the more you tell, the less
you burn in hells intestinal;
in spite of all,
her memory, like her body, is
her own, and serpents guard it
like a tree with treasure in a myth;
if you approach, she’ll turn
the blank side of her words, a shield
to the light, to fix your face
in the bright circle
of its mirror. This time Medusa
has the shield, and the last word.

Of a Sun She Can Remember

After they had been in the woods,
after the living tongue woke Helen’s
hand, afterwards they went back
to the little house of exile, Annie and
Helen, who had lived in the silent
dark, like a bat without radar in
the back of a cave, and she picked up
the broken doll she had dismembered
that morning in her rage, and limb
by limb, her agile fingers moving
with their fine intelligence over each
part, she re-membered the little figure
of the human, and, though she
was inside now, and it was still dark,
she remembered the missing sun
with a slow wash of warmth
on her shoulders, on her back –
as when you step shivering out of
a dank shade into the sun’s sudden
balm – and as the warmth spread,
it felt like the other side of water,
and that is when she knew how
light on water looks, and she put
her outspread hands into the idea
of it, and she lifted the lines of light,
crosshatched like a web, out of
the water, and, dripping, stretched
the golden net of meaning in the light.