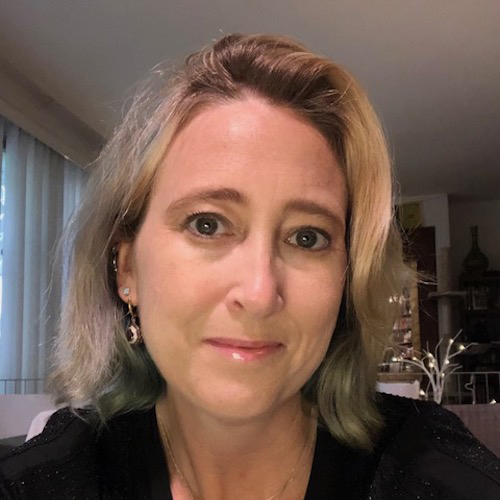 Danielle A. Durkin (Dani) is a queer, Jewish writer of fiction and poetry and a professional book editor from Los Angeles. She worked at Random House as an editor and was a finalist for the Four Way Books Intro. Prize for poetry. Her poetry and fiction has been published in Green Mountains Review, The Siren (at Smith College), GoodUseNYC, Doorknobs and Bodypaint, Cantaraville Volume Four, and The American Journal of Poetry. She contributed poems and stories and co-edited “Daifuku,” a chapbook published by LAMIA INK! Art Bridge.

At Smith College, Durkin majored in philosophy and French studies, class of 1997; JYA in Paris. She has lived in Paris, and in New York, where she received her M.F.A. in creative writing from The New School. As a Cushing’s Syndrome Survivor, a human with chronic illness, and a parent, she frequently explores pain, love, justice, motherhood and liminality in her poems. She now lives in Los Angeles with her family. See her website.

We lost him:
the way you might pluck feathers from a magnificent bird.
Some were invisible losses, or fluff,
Floating away in the wake of rough winds,
storms he weathered inside that handsome body yet,
Still,
stripped him of essential layers,
the insulation of his mellifluous mind.

We lost him:
the way a skiff might flail towards Catalina,
in an unexpected storm, keeling Starboard,
crushing down once to the—
left, righting itself;
Crashing to the right,
now seasick,
now back;
Never coming back.

We lost him: the way an old ballpoint quivers in a dyslexic poet’s hand,
spidery revelations,
Love profound, supreme desperado,
shadowed and mute.
The ink dries up and just:
Frustration,
over
and
over.

We lost him: the way fog fingers take the shape of flame-colored oak leaves,
Rolling in at dawn in Topanga, on a path blazed with succulents.
We still see him:
He walks the white fuzzy labradoodle who matches his snow-white hair,
A cobalt blue Palisades sky.

We lost him: to the earthquakes in his soft, gentle hands,
which shook and failed.
Like the San Andreas Fault near our house, causing spilled food in temblors,
That fell like telephone poles,
His broken lines of communication.

We lost him: the way his novel languishes,
3/4 written,
A protagonist shimmering brilliant in his journey,
Yet wavering for all eternity between dark and light,
At a crossroads:
Minden, Louisiana
New York, New York
Resting, at last,
Pacific Palisades, California,
Writing inside that
House of the Rising Sun.