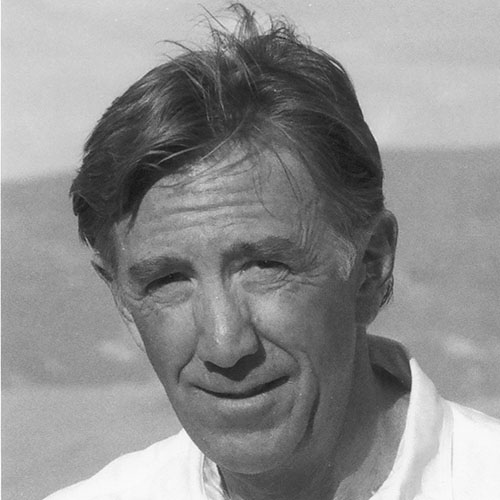 Dan Gerber is the celebrated author of three novels, numerous essays and short stories, and eight books of poetry, most recently A Primer on Parallel Lives and the newly-released Sailing to Cassiopeia, both from Copper Canyon Press. With unusual grace and precision, his poems ask us to attend to those seemingly ordinary experiences that punctuate our lives and can stir our deepest reserves of wisdom and understanding. Rain Taxi has praised the way he “tenderly reels his readers through the ‘beautiful movie’ he calls the passing of time on earth in a language completely unadorned and Zen-like in its quietude.”

As Gerber himself reflected, “In poetry as well as prose, I feel less a creator than an instrument of experience. I write what presents itself to me as necessary.” This openness has led him to explore galaxies and consciousness, tenderness and violence. With playful curiosity and care, Gerber seamlessly joins anecdote, autobiography, and a wondrous eye for the natural world in his poetry, travelling from the periphery to the core. “The purity of his language and the sharpness of his attention,” declared W.S. Merwin, “present landscape, event, and feeling as one.” Annie Dillard wrote of Gerber’s work: “There’s a penetrating and sometimes quirky sensibility at work here, handling violence and beauty with equal respect. In an unembellished language that calls our attention to the world and to its beings rather than to its own virtuosity, these poems credit the reader with intelligence and feeling and ring clear against an essential backdrop of silence.”

Born in western Michigan, educated at Michigan State University, Gerber’s careers reflect his wide-ranging interests: he has worked as a professional racecar driver, a high school teacher, a journalist, and a corporate executive. He traveled extensively as a journalist, particularly in Africa, and has lectured, read, and taught at numerous colleges, universities, libraries, schools, and museums throughout the United States and England. With Jim Harrison, Gerber co-edited the literary journal Sumac, and he has served as writer in residence at Michigan State University and Grand Valley State College. Gerber’s work has been included in The Best American Poetry series, and he is the recipient of a Michigan Author Award and the Mark Twain Award for Distinguished Contributions to Midwestern Literature. He lives with his wife in the Santa Ynez Valley of California.

When your country has been a bad citizen again
and you’re a little ashamed of her,
as you were of your four-year-old
when she threw another tantrum at the mall,
and you wanted to pretend you didn’t know her,
that you weren’t responsible for her bad behavior,
a citizen of the world, as you wish she would be.

Still her mountains glow in the late evening sun,
and your neighbors, who voted to support her arrogance,
smile kindly when you greet them, and you’re moved,
observing their obvious affection for each other,
how he pulls up her collar against the chill breeze
and she smooths back his comb-over again and over.

You saw this in Cincinnati and again in Darfur,
people being conscious and considerate of others,
and you wonder how we ever draw the line
about whom we choose to comfort and whom
it might be quite permissible to kill

from A PRIMER ON PARALLEL LIVES (Copper Canyon Press)

That they too endure desire –
after fifty years the thought still dazes.
Their perfumes. The slow dancing.
Their softness pressing hard against him.
Painfully. Or almost.
The yearning music in parked cars.
The girl who opened her mouth so wide
when they kissed, he felt fear,
as if he’d leaned too far
over the lip of a great cliff.
And the unattainable one,
so terrifying in her beauty,
he simply leaned a little closer
while she asked about the
homework from Macbeth,
to take in all he could
of her fragrance and the more than
half-imagined heat he still suffers.

The sky is round because the eye is round.
A high soprano singing from the fire.

Serpentine hieroglyphics of worm tracks
through the oak.

The clear lubricious wine
that seeps from her most secret space.

Her eyes telling me it’s time to come inside.
Moments of ecstasy on the lip of terror.

The tightrope walker lives by continuance;
the trapeze artist by letting go.

I dream I’m dreaming I wake up
still dreaming.