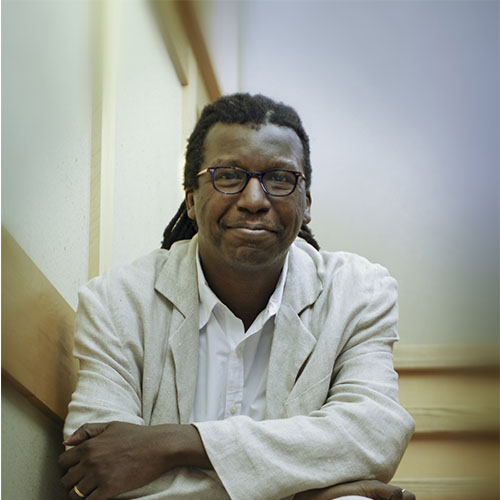 Cornelius Eady is the author of seven books of poetry and two librettos. Praised for his approachable and simple language, Eady captures the emotional vulnerability of life in a clean, elegant style. He has received several awards for his poetry, including the Prairie Schooner Strousse Award and fellowships from the Guggenheim Foundation, the National Endowment for the Arts, the Rockefeller Foundation, and the Lila Wallace-Reader’s Digest Foundation. Never diverting his attention from the African-American experience, Eady addresses the vision of the black man in white imagination with what Booklist calls “tremendous verve, drama, compassion, and insight.”

Born in Rochester, New York, Eady is a New York City poet. His first book of poetry, Kartunes, was published in 1980. Subsequent books include Victims of the Latest Dance Craze, winner of the 1985 Lamont Prize from the Academy of American Poets, The Gathering of My Name, nominated for the 1992 Pulitzer Prize, You Don’t Miss Your Water, and The Autobiography of a Jukebox. His most recent book is titled Brutal Imagination, and is narrated largely by the black kidnapper invented by Susan Smith to cover up the killing of her two young sons. Widely anthologized, Eady has also collaborated with composer Diedre Murray to write two music-dramas, You Don’t Miss Your Water and Running Man, a 1999 Pulitzer Prize finalist. With Toi Derricotte, Eady founded Cave Canem, which offers workshops and retreats for African-American poets.

Described as “the heir of Langston Hughes” by The Southern Review, much of Eady’s work celebrates Harlem, offering, as Leslie Ullman writes, “brief glimpses of urban life, meditations to jazz and blues music, and a quiet, crystalline sort of anger.” His poems also address the experiences of the African-American family threatened by barriers of color and class. Brighde Mullins declares Eady’s work to be “joyous, incantatory, experiential. A verbo-visual kinesis radiates from his … poems.”

Cornelius Eady has taught at Sarah Lawrence College, New York University, The Writer’s Voice, the 92nd St. Y, The College of William and Mary, and Sweet Briar College. Formerly Associate Professor of English and Director of the Poetry Center at SUNY Stony Brook, Eady is currently Distinguished Writer-in-Residence at the City College of New York.

How I Got Born

The speaker is the young black man
Susan Smith claimed
kidnapped her children.

When called, I come.
My job is to get things done.
I am piecemeal.
I make my living by taking things.

So now a mother needs me clothed
In hand-me-downs
And a knit cap.

Whatever.
We arrive, bereaved
On a stranger’s step.
Baby, they weep,
Poor child.

I’m a Fool to Love You

Some folks will tell you the blues is a woman,
Some type of supernatural creature.
My mother would tell you, if she could,
About her life with my father,
A strange and sometimes cruel gentleman.
She would tell you about the choices
A young black woman faces.
Is falling in love with the devil
In blue terms, the tongue we use
When we don’t want nuance
To get in the way,
When we need to talk straight?
My mother chooses my father
After choosing a man
Who was, as we sing it,
Of no account.
This made my father look good,
That’s how bad it was.
He made my father seem like an island
In the middle of a stormy sea,
He made my father look like a rock.
And is the blues the moment you realize
You exist in a stacked deck,
You look in a mirror at your young face,
The face my sister carries
And you know it’s the only leverage
You’ve got?
Does this create a hurt that whispers
How you going to do?
Is the blues the moment
You shrug your shoulders
And agree, a girl without money
Is nothing, dust
To be pushed around by any old breeze?
Compared to this,
My father seems, briefly,
To be a fire escape.
This is the way the blues works
Its sorry wonders,
Makes trouble look like
A feather bed,
Makes the wrong man’s kisses
A healing.

From THE AUTOBIOGRAPHY OF A JUKEBOX (Carnegie Mellon University Press, 1997)

What happens when an old black man,
Toothless and raggedy,
Walks into a bank, catches
Some young, white, middle-manager’s ear
With a slurred tale of coins
Hoarded from his wife and kids
(Who would only have spent them),
Leftovers from various hits
On the numbers, plus
God knows how many
Easy deceptions.

If you were this man, what
Would you do with this true believer
Who has walked through the door
Of your bank, fired up
With what he has pulled off,
Knowing that on some non-verbal level
He has encoded you
(Or someone like you)

As kindred, that only you
(Or someone like you)
Could understand this type
Of fidelity. And somehow
He guides you to the door
And through the glass you see
The trunk of this man’s car,
My father’s car, its springs
Low and ripe as the apricots
Sweetening on his tree
At home. He wants to give you

The weight he has built, penny
By penny. He wants you to lift
Away what you first thought of him,
Bag by precious. And he wants
You to do it, now.

From THE GATHERING OF MY NAME (Carnegie Mellon University Press, 1991)