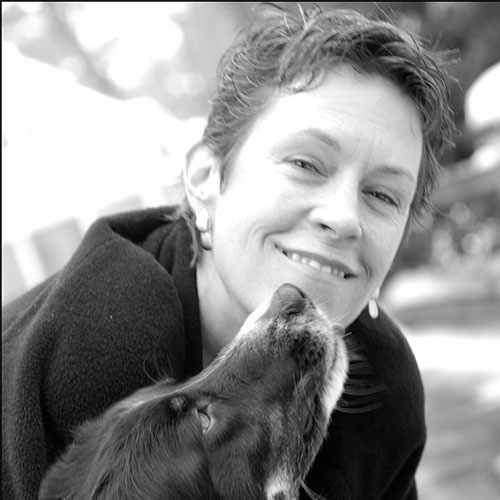 Long a force in both the poetry and publishing worlds, Chase Twichell has been described as a writer of “dazzling and profound imagination.” She is author of six books, most recently Dog Language. Her New & Selected, entitled Horses Where the Answers Should Have Been, is forthcoming from Copper Canyon Press in April 2010. She is also the translator, with Tony K. Stewart, of The Lover of God by Rabindranath Tagore, and co-editor of The Practice of Poetry: Writing Exercises from Poets Who Teach.

A native of New Haven, Connecticut, she received a B.A. from Trinity College (Hartford) and an M.F.A. from the prestigious University of Iowa Writers Workshop. Returning to the east coast, Twichell settled in the Northampton area and worked with Barry Moser as printer, bookbinder, and designer at Pennyroyal Press. In 1983 Twichell began a decades-long career as a teacher of creative writing, first at Hampshire College, followed by the University of Alabama, Goddard College, Warren Wilson College, and Princeton University. In 1999, she founded Ausable Press, a non-profit independent literary press that she operated until it was acquired by Copper Canyon Press in 2009.

Managing to be both meditative and startling, Twichell explores the nature of the human mind and the urgencies of our imperiled natural world with what Boston Review called “fierce psychic inquiry and tremendous lyrical gifts.” She is praised by writers as diverse as Yusef Komunyakaa, Maxine Kumin, and Bill McKibben, who noted that she writes with “utter honesty, and grave splendor, about the overriding fact of our brief moment on earth,” calling these “necessary poems.”

A practicing Buddhist and student in the Mountains and Rivers Order at Zen Mountain Monastery, Twichell’s poems reflect her spiritual practice within the ancient tradition of Basho and Dogen, as well as the contemporary company of Gary Snyder and W.S. Merwin. She follows these rules when writing poems: “Tell the truth. No decoration. Remember death.” Twichell explains that for her, poetry “is an expression of not only the way that I perceive the world, but the way I perceive human consciousness in the world…Not being able to pursue it would be like suddenly being unable to speak.” And: “Poetry’s not window-cleaning. It breaks the glass.”

Twichell has received numerous awards for her work, including fellowships from the National Endowment for the Arts, the Artists’ Foundation, the John Simon Guggenheim Memorial Foundation, the New Jersey State Council on the Arts, and the American Academy of Arts and Letters. She lives in upstate New York with her husband, the novelist Russell Banks.

I peer into Japanese characters
as into faraway buildings
cut from the mind’s trees.

In the late afternoon a small bird
shakes a branch, lets drop a white splash.

In the wind, in the rain,
the delicate wire cage glistens,
empty of suet.

Poetry’s not window-cleaning.
It breaks the glass.

The most beloved body
of my childhood was Johns Brook,
its bed of ancient broken pears,
icy libations pouring
over them for centuries.
Through the leaky oval mask
I entered its alcoves and grand halls,
its precincts of green-brown light,
the light of my infant thinking.
In the minnow-bright roar
I saw the place where life and art
meet under water, stone to stone,
with the sunken treasure and trash.
The sound of the brook
was the sound of the house,
the pools of the kitchen and bedrooms
A galaxy away it would still be
the background of my sleep.

Clouds came down to earth,
great gloomy rooms among the trees,
dark rooms of the brook,
church of deep pools.
As soon as you entered
you were wholly alone in it,
all sinewy ladders
and gray stairs, stones magnified
and the sidelong trout,
all gone now,
rainbows and brookies,
one big one per pool,
gills like fresh cuts.

I dove into the flume’s mystery,
no place you touch bottom
or see all the way down in
because half at least
was always in shadow.
It was like learning a room
by carrying a candle
corner to corner,
looking for God to see if He, too,
were awake and listening
to the river crumpling and erasing,
enforcing its laws.
I found a cold, oblique god,
who commanded me to answer
all my questions by myself.

The English language
is also a beautiful river,
full of driftwood and detritus,
bones hung with trinkets,
scant beaches more stones then sand.
And up on the hills it’s the wind
touching the juniper spurned
by the cows, its thistle sharpness,
and the fawn’s hoof
left by coyotes,
in their scat.

I know what I have to give up.
It’s not the flashy green commotion
of leaves this August evening,
garden blackening, drinking,
or the dogs unsettled by thunder
I can’t yet hear. It’s not the teakettle’s
ongoing quarrel with itself,
or the snow’s beauty coming from far away
to cover the beauty now ascending

There’s no sense giving up
what will be taken from me anyway,
first youth, now middle age departing,
the eastern woodlands stricken
by acid and blight,
beloved sky blue-blackening,
cedar waxwings swooping
low over the pond, feeding,
fattening for their voyage
to a world devoid of us.

I know what I need to know.
No path lies ahead of me.
Where I go, it follows.
I lead it to the monastery,
where I sit steadfast in the very early hours,
a pure Zen Yankee candle, my flame a vow
to save all sentient beings, beginning with myself.
I also take it into the vast playgrounds
of distraction, confusion, intoxication, desire,
drugged by anxiety and second guesses,
and deep into television’s alternative wilderness.
What a beautiful war I wage,
the two poles equal magnets,
perfectly matched, married –
my own perfect paralysis.

Present then absent then present,
I inhibit the moment or do not.
It’s one continuous decision.
The waxwings don’t decide which insects
to eat tonight, nor wind pause to think before
clouding the mirror of the trees.
They leave no monuments.
Me, I’m always forsaking one place for another,
breaking branches to mark my way home,
taking leave of the tall grasses
heavy with seed-heads I crush underfoot,
birches vivid in storm-light, dogs just groomed,
fearful of thunder under the desk.
I smell garlic. Russel is making a marinade
for the trout he’ll grill beneath an umbrella.
I realize, then forget, then realize that mind
is an ax that splits the one continuous moment.
Lightning! Scared dogs! Dinner! Brook music!
My eye goes home to the pond,
the bluestone slates I laid in the low places,
rain-shining their way to the water.

From HORSES WHERE THE ANSWERS SHOULD HAVE BEEN (Copper Canyon Press, 2010)