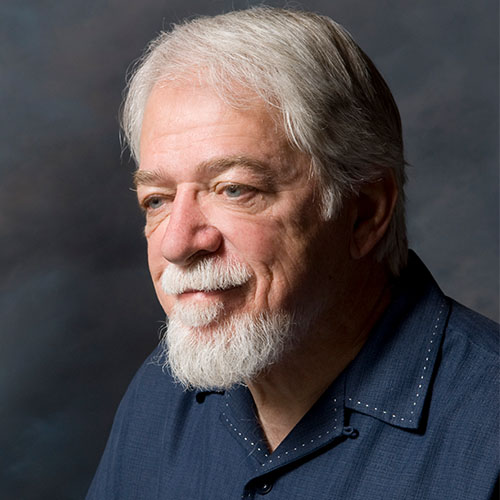 B.H. Fairchild grew up in West Texas, Oklahoma, and Kansas. While he now lives in Claremont, California, teaching poetry and creative writing at California State University, his work focuses largely on the working-class world of the midwest, the isolations of small-town life, and the possibilities of beauty and grace to be found there. Fairchild’s poetic voice was born of the struggle to reconcile his working-class, dustbowl upbringing with the world of the intellect. “I was looking for the place where I could recover the very center of my being as I had known it as a child. . . and [it] dawned on me: what I had wanted was what poetry is.”

Poetry became Fairchild’s way of seeing the world, and of recreating the grime and majesty of his father’s oil field machine shop, the weary dignity of the roustabouts and roughnecks, in what the Los Angeles Times called “workhorse narratives suffused with tenderness and elegiac music.” He is in touch, writes Gerald Stern, “with that America we almost forgot – melancholy, dream-ridden, wistful, ghost-like.” Or, as Richard Howard observed, “With resonances evocative of Sherwood Anderson, of E.A.Robinson, and letterly of James Wright and Richard Hugo, this art of Fairchild’s…enriches the tragic theme of the American loneliness.”

Fairchild is the author of Such Holy Song, a study of William Blake, as well as four volumes of poetry, including The Arrival of the Future and The Art of the Lathe, winner of the Beatrice Hawley Award, the William Carlos Williams Award, the Kingsley Tufts Poetry Award, and a National Book Award finalist. As a National Book Award Judge’s citation exults, Fairchild “risks ugliness to find poetry – yet the ease with which the poems reveal the music in the earthbound cadence of factory life is thrilling and utterly convincing.” Other honors include Guggenheim and Rockefeller Fellowships and the Rense Poetry Award from the American Academy of Arts and Letters.

The universe contained within Fairchild’s most recent collection, Early Occult Memory Systems of the Lower Midwest – the National Book Critics Circle Award selection for 2003 – is deep and familiar, a world that is empty, still and sad, yet on the verge of becoming. “This,” claimed The New York Times Book Review, “is the American voice at its best: confident and conflicted, celebratory and melancholic.”

In his fifth year the son, deep in the backseat
of his father’s Ford and the mysterium
of time, holds time in memory with words,
night, this night, on the way to a stalled rig south
of Kiowa Creek where the plains wind stacks
the skeletons of weeds on barbed-wire fences
and rattles the battered DeKalb sign to make
the child think of time in its passing, of death.

Cattle stare at flat-bed haulers gunning clumps
of black smoke and lugging damaged drill pipe
up the gullied, mud-hollowed road. Road, this
road. Roustabouts shouting from the crow’s nest
float like Ascension angels on a ring of lights.
Chokecherries gouge the purpled sky, cloud-
swags running the moon under, and starlight
rains across the Ford’s blue hood. Blue, this blue.

Later, where black flies haunt the mud tank,
the boy walks along the pipe rack dragging
a stick across the hollow ends to make a kind
of music, and the creek throbs with frog songs,
locusts, the rasp of tree limbs blown and scattered.
The great horse people, his father, these sounds,
these shapes saved from time’s dark creek as the car
moves across the moving earth: world, this world.

We are at the Bargello in Florence, and she says,
what are you thinking? and I say, beauty, thinking
of how very far we are now from the machine shop
and the dry fields of Kansas, the treeless horizons
of slate skies and the muted passions of roughnecks
and scrabble farmers drunk and romantic enough
to weep more or less silently at the darkened end
of the bar out of, what else, loneliness, meaning
the ache of thwarted desire, of, in a word, beauty,
or rather its absence, and it occurs to me again
that no male member of my family has ever used
this word in my hearing for anyone else’s except
in reference, perhaps, to a new pickup or dead deer.
This insight, this backward vision, first came to me
as a young man as some weirdness of the air waves
slipped through the static of our new Motorola
with a discussion of beauty between Robert Penn Warren
and Paul Weiss at Yale College. We were in Kansas
eating barbecue-flavored potato chips and waiting
for Father Knows Best to float up through the snow
of rural TV in 1963. I felt transported, stunned.
Here were two grown men discussing “beauty”
seriously and with dignity as if they and the topic
were as normal as normal topics of discussion
between men such as soybean prices or why
the commodities market was a sucker’s game
or Oklahoma football or Gimpy Neiderland
almost dying from his hemorrhoid operation.
They were discussing beauty and tossing around
allusions to Plato and Aristotle and someone
named Pater, and they might be homosexuals.
That would be a natural conclusion, of course,
since here were two grown men talking about “beauty”
instead of scratching their crotches and cursing
the goddamned government trying to run everybody’s
business. Not a beautiful thing, that. The government.
Not beautiful, though a man would not use that word.
One time my Uncle Ross from California called my mom’s
Sunday dinner centerpiece “lovely,” and my father
left the room, clearly troubled by the word “lovely”
coupled probably with the very idea of California
and the fact that my Uncle Ross liked to tap-dance.
The light from the venetian blinds, the autumn,
silver Kansas light laving the table that Sunday,
is what I recall now because it was beautiful,
though I of course would not have said so then, beautiful,
as so many moments forgotten but later remembered
come back to us in slants and pools and uprisings of light,
beautiful in itself, but more beautiful mingled
with memory, the light leaning across my mother’s
carefully set table, across the empty chair
beside my Uncle Ross, the light filtering down
from the green plastic slats in the roof of the machine shop
where I worked with my father so many afternoons,
standing or crouched in pools of light and sweat with men
who knew the true meaning of labor and money and other
hard, true things and did not, did not ever, use the word, beauty.

The blue notes spiraling up from the transistor radio
tuned to WNOE, New Orleans, lifted me out of bed
in Seward County, Kansas, where the plains wind riffed
telephone wires in tones less strange than the bird songs
of Charlie Parker. I played high school tenor sax the way,
I thought, Coleman Hawkins and Lester Young might have
if they were, like me, untalented and white, but Ornithology
came winding up from the dark delta of blues and dixieland
into my room on the treeless and hymn-ridden high plains
like a dust devil spinning me into the Eleusinian mysteries
of the jazz gods though later I would learn that his long
apprenticeship in Kansas City and an eremite’s devotion
to the hard rule of craft gave him the hands that held
the reins of the white horse that carried him to New York
and 52nd Street, farther from wheat fields and dry creek beds
than I would ever travel, and then carried him away.