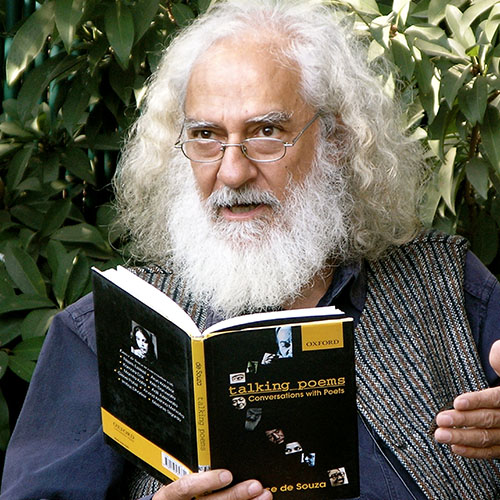 Poet, translator, essayist, and editor Arvind Krishna Mehrotra was born in Lahore and educated at the universities of Allahabad and Bombay. He is the author of four books of poems, Nine Enclosures (Clearing House, 1976), Distance in Statute Miles(Clearing House, 1982), Middle Earth (OUP, 1984) and The Transfiguring Places(Ravi Dayal, 1998). As the journal Fulcrum proclaims, “His poems derive their power from what they leave out as much as what they say, as if a host of ghost lines stood behind eeach line on the page.”

Since 1968, Mehrotra has taught at the University of Allahabad, where he is currently Professor of English. He has been a visiting writer at the University of Iowa’s International Writing Program, a Homi Bhabha Fellow, and has spent periods of residence at Yaddo, Saratoga Springs, N.Y. and at the Rockefeller Foundation’s Bellagio Study and Conference Center, Bellagio.

A History of Indian Literature in English, which he edited, was awarded the Choice magazine’s Outstanding Academic Title of the Year. Mehrotra also edited The Oxford India Anthology of Twelve Modern Indian Poets (OUP, 1992) and The Last Bungalow: Writings on Allahabad (Penguin, 2007). His translation, The Absent Traveller: Prākrit Love Poetry from the Gāthāsaptaśatī of Sātavāhana Hāla (1991), has recently been reprinted in Penguin Classics.

Mehrotra’s poems, essays, and translations have appeared in dozens of anthologies, most recently, Language for a New Century: Contemporary Poetry from the Middle East, Asia, and Beyond (W. W. Norton, 2008), Longman Anthology of World Literature (Longman, 2004), and Vintage Book of Modern Indian Literature (2004). His most recent publications include Songs of Kabir (translations) and Partial Recall: Essays on Literature and Literary History, both 2011.

This is about the green miraculous trees,
And old clocks on stone towers,
And playgrounds full of light
And dark blue uniforms.
At eight I’m a Boy Scout and make a tent
By stretching a bedsheet over parallel bars
And a fire by burning rose bushes,
I know half a dozen knots and drink
Tea from enamel mugs.
I wear khaki drill shorts, note down
The number-plates of cars,
Make a perfect about-turn for the first time.
In September I collect my cousins’ books
And find out the dates of the six Mughals
To secretly write the history of India.
I see Napoleon crossing the Alps
On a white horse.

My first watch is a fat and silver Omega
Grandfather won in a race fifty-nine years ago;
It never works and I’ve to
Push its hands every few minutes
To get a clearer picture of time.
Somewhere I’ve kept my autograph book,
The tincture of iodine in homeopathy bottles,
Bright postcards he sent from
Bad Ems, Germany.
At seven-thirty we are sent home
From the Cosmopolitan Club,
My father says, ‘No-bid,’
My mother forgets her hand
In a deck of cards.
I sit reading on the railing till midnight,
Above a worn sign
That advertises a dentist.

I go to sleep after I hear him
Snore like the school bell:
I’m standing alone in a back alley
And a face I can never recollect is removing
The hubcaps from our dull brown Ford.
The first words I mumble are the names of roads,
Thornhill, Hastings, Lytton;
We live in a small cottage,
I grow up on a guava tree
Wondering where the servants vanish
After dinner, at the magic of the bearded tailor
Who can change the shape of my ancestors.
I bend down from the swaying bridge
And pick up the river
Which once tried to hide me:
The dance of torn skin

Is for much later.

Canticle for My Son

The dog barks and the cat mews,
The moon comes out in the sky,
The birds are mostly settled.
I envy your twelve hours
Of uninterrupted dreaming.

I take your small palms in mine
And don’t know what
To do with them. Beware, my son,
Of those old clear-headed women

Who never miss a funeral.

Where Will the Next One Come From

It will be the curse coming home