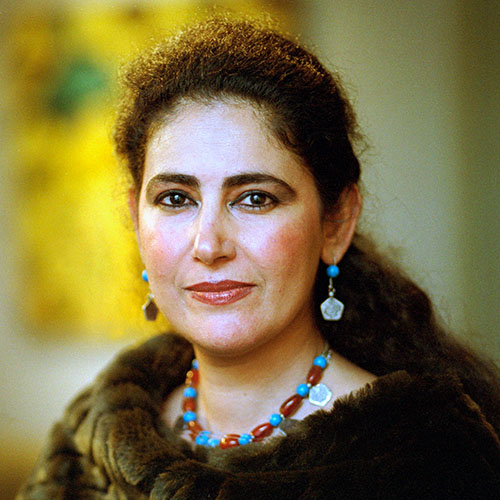 Born in Baghdad, Amal al-Jubouri published her first collection of poems, Wine from Wounds, at the age of 19. After studying English Literature at the University of Baghdad, she worked as a journalist and translator, and founded East-West Publishing, whose mission is to introduce works of international literature to the Iraqi literary scene. In 1997, seeking political asylum, Al-Jubouri immigrated to Germany where she launched Al-Diwan, the first and only Arab-German literary magazine. In addition to being president of the East-West Diwan German Cultural Foundation, al-Jubouri acts as cultural counselor for the Yemen Embassy in Berlin where she currently lives and writes.

A crucial voice in contemporary Iraqi and Arabic-language poetry, author of five collections, and translated into 12 languages, al-Jubouri has just now arrived to English, with Hagar Before the Occupation, Hagar After the Occupation (Alice James Books, 2011). Translated by Rebecca Howell with Husam Qaisi, these pairs of before/after poems offer many-layered meditations on the tremendous upheaval of a nation and its people, set against the ancient story of Hagar. Gerald Stern called the book “courageous, honest, bitter, and beautiful.”

Bold and spare, each poem in Hagar is an act of witness rather than a vehicle of political expression or resistance. Alongside vivid and heart-rending images of Iraq before and after the American occupation, we witness the speaker’s struggle to reconcile her state of doubleness, torn between identities, at once insider and alien. “Struck by the force and intimacy of al-Jubouri’s language,” writes Alicia Ostriker in the introduction, “we experience the beauty of her writing as redemptive in the face of despair.”

Hagar was one of six collections of poetry shortlisted for the 2012 Best Translated Book Awards (BTBA), and was listed by Library Journal as a best book of 2011 and by Memorious as a new book to watch. Carolyn Forché praised it for “transporting Amal al-Jubouri’s moving cri de coeur across the precarious bridge between Arabic and English as well as the cultural, political, and ethical chasm separating Iraq and the United States.” “This is poetry necessary to our times,” Forché concludes, “and we owe the makers of this work in English an enormous debt of gratitude.”

Poetry Before the Occupation

Your beckoning eyes guided me
to my country
bringing Berlin to the streets
of Baghdad
Before the womb expelled me
you were my cord to the placenta
I was your creation
No—your goddess
I, your heiress
You, my slave
You, my god
translated from the Arabic by Rebecca Gayle Howell and Husam Qaisi
From HAGAR BEFORE THE OCCUPATION, HAGAR AFTER THE OCCUPATION (Alice James Books, 2011)

My husband before the occupation

He stumbled between his fear and his fire
I was slave but his mistress, lady

His name, a tattoo of my pain
His past, a crematorium for my poetry

Once upon a time, my husband—

translated from the Arabic by Rebecca Gayle Howell and Husam Qaisi
From HAGAR BEFORE THE OCCUPATION, HAGAR AFTER THE OCCUPATION (Alice James Books, 2011)

My husband after the occupation

The Mujahideen, now in our house,
would smell love’s musk, our sweat

They’d behead anyone
who had both love and breath

translated from the Arabic by Rebecca Gayle Howell and Husam Qaisi
From HAGAR BEFORE THE OCCUPATION, HAGAR AFTER THE OCCUPATION (Alice James Books, 2011)