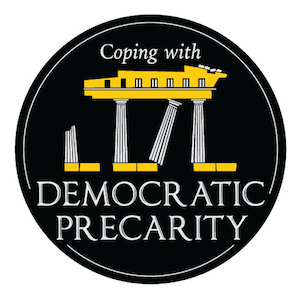 Democracy is faltering. At every level of governance and across multiple domains, democratic institutions, norms, and practices are under increasing strain. Anxiety about the fate of democracy is not new. Yet the 21st century confronts it with challenges on a scale rarely seen in modern history, raising significant questions about both the sustainability of democracy and how to nurture projects of democratic renewal. At the level of the international system, the post-WWII liberal international order is widely viewed as no longer capable of responding adequately to the anti-democratic forces arrayed against it. At the level of states, a leading index of freedom around the world warned in its 2019 report that democracy is “in retreat,” citing thirteen consecutive years in which democratic freedoms have eroded. At the local level, within communities, organizations and workplaces, basic democratic rights, including the rights of workers to organize and engage in collective bargaining, have been curtailed by the rising power of conservative political forces. Technologies once celebrated as benign and empowering—enabling new forms of grass-roots democratic activism—now loom large as threats to basic democratic rights.

The apparent exhaustion of democratic governance stands in sharp contrast to the vigor and enthusiasm associated with non-democratic ideas and regimes. In the US, the EU, and across the developing world, processes of “autocratization” have accelerated. Illiberal political parties that advocate nativist-populist ideologies are gaining ground, weakening social cohesion in societies that inequality, exclusion, and polarization have rendered vulnerable to anti-democratic appeals. Established autocracies, including Russia and China, have consolidated their standing as global powers. New transnational authoritarian networks and institutions are taking shape that diminish possibilities for democratic transformations in world regions such as the Middle East and Latin America.

What does democratic theory have to teach us about the struggles ahead?  What is the relationship between pluralism and democracy?  What does high quality democracy look like and what conditions would foster its development?

The questions and problems are vexing, wide-ranging, and cross-cutting, and, thus, offer rich possibilities for inter-disciplinary engagement. . For social scientists, humanists, and scholars in the natural and physical sciences questions about the future of democracy have generated ambitious, exciting research programs that invite exploration from scholars across academic divisions. These include scholarship focusing on the impact of technologies of surveillance and behavioral monitoring (and modification) on democracy, the implications of big data on electoral practices, the effects of internet ubiquity on information flows and social control, the development of systems responsive to democratic norms that are capable of responding effectively to major crises, like pandemics, as well as the causes and effects of new forms of identity politics, the effects of economic inequality on democratic norms and practices, how the ongoing transformations of media are shaping political, social, and economic contexts relevant to the renewal of democracy, the challenges of immigration expansion, the sources and trajectories of new anti-democratic or illiberal politics, and emergent challenges to solidarity within communities, in workplaces, and in other sites in which local forms of politics unfold. Scholars from across the disciplines are also wrestling with how to renew and revitalize democracy, exploring new modes of popular mobilization, including labor mobilization and efforts to give voice to marginalized and excluded communities, new possibilities for strengthening democratic institutions, opportunities to temper the malign effects of economic globalization, and many others. Mindful of the broad, varied, and rich research opportunities that are linked to the theme of democracy, this project will bring together scholars from across disciplines to explore the causes and effects of democratic precarity. Yet the project will not focus exclusively on diagnosing democratic decline and dysfunction. It will also engage scholars across disciplines at Smith and the Five Colleges who direct their attention to possibilities for pathways toward democratic renewal and the realization of high-quality democracy within communities, countries, and in domains of global governance.