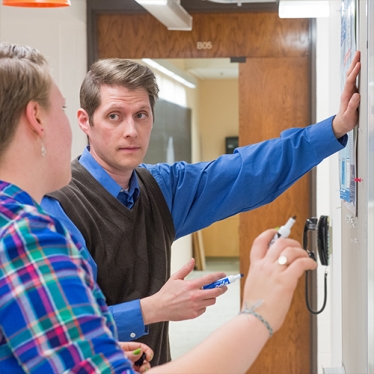 Will Williams’ research is in experimental cold atom physics.

His current project is high precision spectroscopy of atomic beryllium as a test of quantum electrodynamics (QED).

Williams received dual B.S. degrees—one in physics and one in mathematics—from Clarkson University. He went on to a fellowship at the University of Wisconsin–Madison, where he got his doctorate in experimental cold atom physics. His dissertation was both theoretical, creating complex optical potentials for use in atomic lithography, and experimental, cold atom modulation instability, a nonlinear effect where atom/light interactions "grow" frequency compenents. After getting his Ph.D., Williams became a postdoctoral researcher at Argonne National Laboratory, which is located outside Chicago and managed by the Department of Energy. There, he had two main projects: Trace analysis using cold atom techniques (also known as Atom Trap Trace Analysis) and a weak interaction study using radioactive helium-6 that tests the validity of a nuclear theory known as The Standard Model. Next, he took a second postdoc position at Old Dominion University, where his research shifted to a photoassociation spectroscopy (making molecules from cold atoms), Rydberg Physics and underwater LIDAR.

During his two postdocs, Williams designed, built and ran experiments at many different facilities around the country, including the Center for Experimental Nuclear Physics and Astrophysics (CENPA), the free electron laser at Thomas Jefferson National Laboratory and NASA.