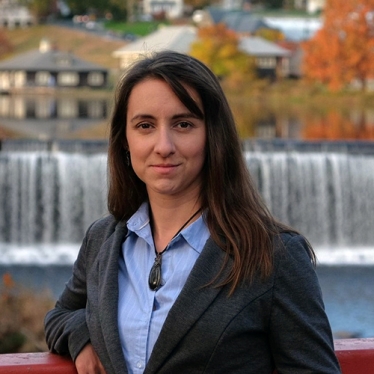 Sarah Mazza is a hard-rock geologist who began her career at the University of North Carolina. Torn between furthering her education in topics of petrology or structural geology, she ended up at Virginia Tech to pursue a master’s degree under the supervision of Rick Law. While studying the thermal deformation of shear zones in Scotland and Nepal, Esteban Gazel approached her to join the “dark side” and descend into mantle geochemistry. Her doctorate focused on understanding non-plume-related intraplate volcanism by studying the youngest volcanoes of eastern North America (found in Virginia and West Virginia!) and the enigmatic volcanism of Bermuda. After completing her doctorate in 2016, Mazza joined a group of cosmo-chemists at the University of Münster (Germany) as a postdoctoral research scientist. While her colleagues were studying meteorites and planetary formation, she kept the research group “grounded,” investigating stable tungsten isotopic fractionation on Earth. Current and future research will include locations around the world with the broad goal of understanding the evolution of the Earth via volcanoes.

Mazza’s courses include Introduction to Earth Processes and History, Mineralogy, and Petrology.