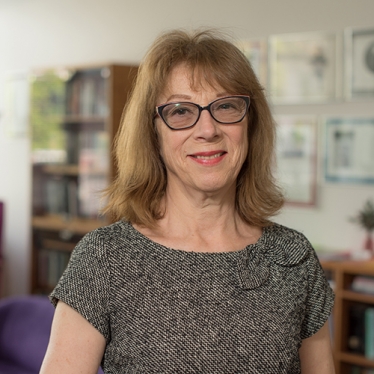 Born and educated in France, Martine Gantrel's area of specialization is in literary and cultural studies of 19th- and early 20th-century France, in particular the Novel as a genre from the Romantic period to the Belle Époque; the relationship of literature to history; cultural and literary sub-genres (French gastronomy, the Regionalist novel, Les Cris de Paris, the representation of female domestic servants); and French cinema. Her publications have appeared in journals such as Les Cahiers naturalistes, L'Esprit créateur, La Revue d'Histoire Littéraire de la France, Romantisme, Ninteenth-Century French Studies and The French Review. She is currently at work on a book on the poetics of sound in Proust's A la recherche du temps perdu.

Gantrel joined the Smith faculty in 1980 and regularly teaches language as well as French cinema and topic courses on 19th- and 20th-century French literature. In 2014 and 2016, she directed the Smith Junior Year Abroad program in Paris.

"The First Junior Year Abroad Programs in France: How They Started and Why." Academia.edu, June 2015.