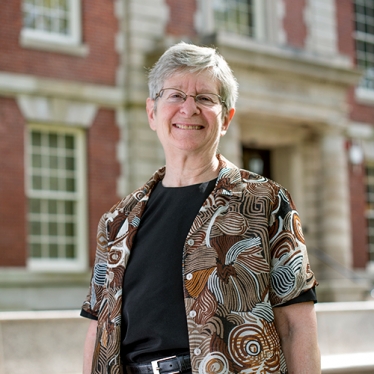 Martha Ackelsberg joined the Smith faculty in 1972, was appointed Five College 40th Anniversary Professor in 2006, and William R. Kenan Jr. Professor in 2007. She retired at the end of 2014. At Smith, Ackelsberg participated in the Project on Women and Social Change from 1977–87 and helped create what became the Women’s Studies Program (currently the Program on the Study of Women and Gender). She also taught occasionally at Hampshire College and at the University of Massachusetts Amherst, and spent a semester (two terms) on a faculty exchange at the School of Social Sciences of the University of Sussex. She spent leave and/or sabbatical time as a fellow at the Bunting Institute of Radcliffe College (1983–84), as a faculty associate of the Center for European Studies at Harvard University (1983–84), a visiting scholar at the Institute for Research on Women at Columbia University (1987–88), a visiting fellow at the Walt Whitman Center for the Culture and Politics of Democracy at Rutgers University (1992–93), and as a member of the interdisciplinary Human Security Seminar cosponsored by CUNY Graduate Center and the National Center for Research on Women, 2003–04. During the 2010–11 academic year, she served as resident director of PRESHCO (Programa de Estudios Hispánicos-Córdoba), a consortial junior-year abroad program in which Smith participates. She served as campus representative to PRESHCO between 2011 and 2014, and then as executive director of PRESHCO from January 2014 through September 2015.

Her teaching, research and writing all center on the nature and structure of political communities, and, in particular, patterns of power and participation within them. Ackelsberg's teaching included courses and seminars in (U.S.) urban politics, political participation, the politics of wealth and poverty, and feminist and democratic theory. Her research has focused on the anarchist movement in Spain, and, particularly, the place of the subordination and emancipation of women within the anarchist project and on women's place in the political arena in the United States. She has been particularly concerned with the ways minority women are included in, or excluded from, the structures of communal life, the options that leaves to those excluded, and the ways in which those who have been on the margin respond to their marginality. She has come to believe that attention to these issues requires a reconceptualization of both political life and of the categories in which we analyze it.

The major focus of Ackelsberg's work on Spain is the anarchist women's organization, Mujeres Libres. Her book Free Women of Spain: Anarchism and the Struggle for the Emancipation of Women, explores Mujeres Libres' roots in the broader anarchist movement, and examines the unique approach of the movement to issues of political vision and political mobilization. It provided her an opportunity both to explore anarchist perspectives on some critical problems of social change and political strategy, and to address contemporary issues about incorporating diversity into feminist and other political movements. That book has since been translated into Spanish, Italian and French. Continuing interest in the history of that movement has enabled her to make a number of trips to Spain to speak with and to local anarchist and women's groups—most notably in June of 2012, for a series of celebrations marking the 75th anniversary of the founding of Mujeres Libres, and in September 2017, for events marking the 80th anniversary of the founding. She has continued her studies in recent work exploring how the legacy of Mujeres Libres was taken up by feminist groups in Spain in the 1970s and '80s, and the cross-national impacts of Spanish anarchism in Cuba and Argentina.

Other work has been a further exploration of what Ackelsberg terms "applied feminist theory," and, specifically, constructions of gender and citizenship. She has examined how feminist theorizing and feminist activism have affected the ways we think about some central political concepts; e.g., public and private, autonomy and dependence, participation and democracy and exploring the implications of these changes for public policy and our understandings of what it is to be a citizen. She is also interested in questions of identity and identity politics: both the continuing power of such claims, and the dangers associated with them, for feminists and in the larger culture. A book of essays exploring these and other issues, Resisting Citizenship: Feminist Essays on Politics, Community, and Democracy (Routledge), was published in 2010.

Additional writing has focused on the interconnections of politics, spirituality and community, particularly in a Jewish context. Ackelsberg has written a number of articles on politics and spirituality, on women in Judaism, on changing family structures in the Jewish community, and on the place of lesbians, gays, and bisexuals and the transgendered within the Jewish community. And, more recently, she has been a contributor to ongoing debates about gay marriage. Ackelsberg is continuing to write and speak about issues related to (gender and) Spanish anarchism. In addition, she is working on a new project on the politics of historical memory in Spain, exploring the ways the era of Muslim rule in the Peninsula, and the subsequent efforts to "Christianize" the region—including by expulsion of Jews and Muslims and the Inquisition—has, and has not, been incorporated into contemporary Spanish national identity.

During the 2000–01 academic year, she codirected a Kahn Institute interdisciplinary project, "From Local to Global: Community Activism and the Academy." The project aimed to support the work of faculty members and students at Smith who are studying social movements and social activism, and to increase ties between Smith and local community activists. It sponsored an ongoing seminar on social activism for faculty and student fellows, organized public symposia and hosted social activists for short-term residencies at Smith. During spring break, the students and many faculty members visited the U.S.-Mexico border at Tijuana to study activism there. The activities of that year also provided some important inspiration/impetus for what is now The Steinem Initiative's Gloria & Wilma School for Organizers, which works with the Sophia Smith Collection. In 2005-06, Ackelsberg participated again in a Kahn Institute seminar, this time on "City Lives and City Life."

Throughout her time at Smith, she maintained an active involvement in a variety of progressive Jewish and feminist organizations. She was also a member (and chair) of the Northampton Housing Partnership, and served in a variety of leadership positions in the American Political Science Association.