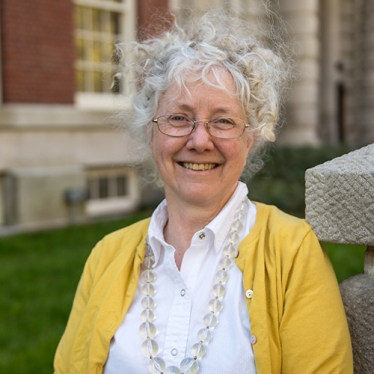 Having lived as a child in Latin America in a Swedish-, English- and Spanish-speaking household, Margaret Bruzelius thinks the study of world literatures has always been the only possible discipline for her. She studied French and English literature as an undergraduate, took a long detour through fashion and design, and then returned to study comparative literature in her 30s, having acquired a husband and two children.

Seven years, two more children and a dissertation later, Bruzelius began teaching at Harvard, then serving as a resident dean. She is now the dean of the seniors and associate dean at Smith, and also teaches in comparative literature.

Bruzelius’ two areas of research are the adventure novel, especially its organization of space and gender roles for girl heroes. Her current STRIDE project The Atlas of Girl’s Fiction combines student- created maps with a blog in order to articulate the limitations imposed on girl heroes in adventure and fantasy fiction. Her other active area of interest is experiments in language from Apollinaire's Calligrammes to May Swenson's Iconographs to Xu Bing's The Book from the Ground, a novel written entirely in pictographs. She is interested in writers and artists whose work attempts to modify our relation to the real by modifying our relation to the written—people who, like Dr. Seuss, go "on beyond zebra."

Her book Romancing the Novel: Adventure from Scott to Sebald, explores the adventure novel genre in writers such as Walter Scott, Jules Verne and Alexandre Dumas Pere.  In it she traces the continuing effects of the the ubiquitous and commonplace romance plot in the work of writers not usually associated with "boys' books," such as Freud, George Eliot, Ursula Le Guin, Joseph Conrad and W. G. Sebald.

Romancing the Novel: Adventure from Scott to Sebald