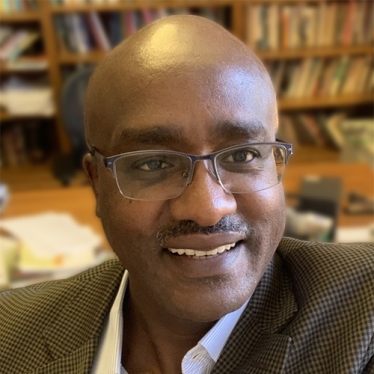 Katwiwa Mule grew up in Kenya, speaking Kikamba, Kiswahili, English; later, during his high school years, he picked up Gikuyu and Kiembu. Like so many African children who grow up in an environment where many languages and cultures coexist, his life experience was a dress rehearsal for comparative study—though he never imagined being a comparatist!

After earning a bachelor of education and master of arts from Kenyatta University in Nairobi and spending two years teaching Swahili language and literature at Egerton University in Kenya, Mule came to the United States and earned a doctorate in comparative literature with a minor in women's studies from Penn State.

Women's Spaces, Women's Visions: Politics, Poetics, and Resistance in African Women's Drama (2007), focuses on the ways in which colonial histories, postcolonial politics and the theatrical inventiveness of African female playwrights come together to establish gendered performance spaces that reflect the complexities of African women's realities.