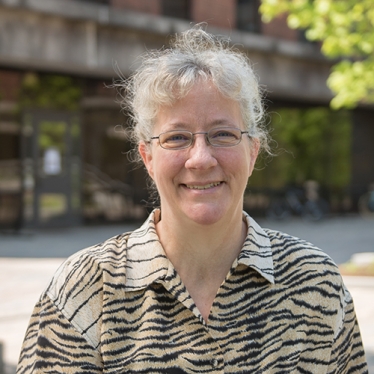 B.S., University of Texas at Austin

Joyce Palmer-Fortune has been a full-time laboratory instructor and lecturer with the physics department at Smith College since the fall of 2003. In addition to teaching she has worked to bring PER-based pedagogy into the introductory physics classrooms, and she oversaw the transition to the department's current combined lecture and lab format. Palmer-Fortune is active in a number of other roles at Smith; she is the physics department's representative on the Science Center Committee on Diversity, the physics department's liaison to the Spinelli Center and coordinator for the learning assistant’s program at Smith. She is active in the AEMES, STRIDE and early research programs.

She was also a researcher at Nippon Telegraph and Telephone (NTT) in Tokai, Japan, and at the Optoelectronics Technology Research Laboratory (OTRL) in Tsukuba, Japan. Her research was on the initial stages of thin film crystal growth in Molecular Beam Epitaxy (MBE) and Chemical Vapor Deposition (CVD) of II-IV and III-V compound films on III-V compound and silicon substrates. Specifically, she worked on growth of ZnSe thin films on GaAs substrates by MOVPE at NTT, and GaSe thin films on GaAs and silicon substrates at OTRL. She characterized the films using techniques such as Auger Electron Spectroscopy, Ion Beam Spectroscopy, Electron Microscopy, X-ray Photoelectron Spectroscopy and Photoluminescence.

Joyce’s current research is on using transmission electron microscopy to study the microstructure of metal-insulator films for use as very low temperature thermometers. She also works in collaboration with Nat Fortune (Smith College) and Andreas Rydh (Stockholm University) on refining and the processes for fabricating nanocalorimeters. The films we study are grown in the lab of our Swedish collaborators, and the TEM sample prep and microscopy are done at Smith College.

Thin films composed of a mixture of metals and insulators can have a number of different modes of conduction, some of which are very sensitive to temperature. The mode of conduction depends strongly on the microstructure of the thin film – specifically – how is the metal dispersed within the insulator? If the metal particles are too far apart, the film will act like an insulator, and the material usually doesn’t make a good thermometer. If the metal particles are touching, then conduction is like normal metallic conduction and is also not very sensitive to temperature changes.

However, if the metal particles are close to each other but not touching, normal metallic conduction can’t happen, but electrons can hop from one metal island to the next via tunneling. This hopping process is very temperature sensitive, which means these materials potentially very useful as thermometer at very low temperatures. We would like to look metal particle size and distribution for some new metal-oxide combinations that have shown some promising R vs T characteristics, with the hope that we will also gain some insight about how to grow these films more reproducibly.

Ultimately these metal-insulator films will be incorporated as thermometers in microfabricated nanocalorimeters. Using nanocalorimetery, we can measure fundamental properties of very small quantities of materials and study the basic mechanisms of conduction in novel and potentially innovative materials.