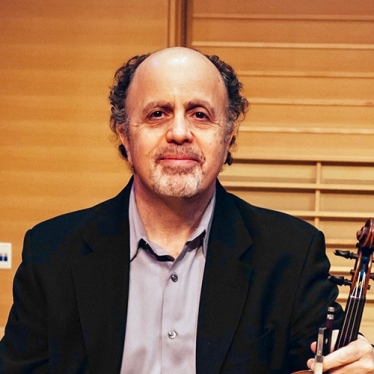 Joel Pitchon is active as a soloist, concertmaster and chamber music player. He has received acclaim for his performances with nationally and internationally renowned ensembles.

Pitchon studied with Lewis Kaplan, Oscar Shumsky and Joseph Fuchs, and received his degrees from The Juilliard School. He has served as the concertmaster of numerous orchestras, including the Orquestra Ciutat de Barcelona (Spain), the New York Virtuosi Chamber Orchestra, the Colorado Music Festival Orchestra, the New Zealand Symphony (guest), the National Arts Centre Orchestra (Ottawa, Canada, guest) and the EOS Orchestra (NY). He has participated in many concerts in the United States and abroad with the Orpheus Chamber Orchestra and the New York Philharmonic.

Mr. Pitchon also works extensively in chamber ensembles. He has been a member of the Forster String Trio, the Walden Chamber Players and the Kinor String Quartet, among other groups. Each summer he participates in a series of concerts as leader of the New Baroque Soloists. Mr. Pitchon is currently a member of the Sage Chamber Music Society.

As a soloist he has performed with the Orquestra Ciutat de Barcelona, Philharmonia Virtuosi, and the EOS Orchestra among others. The New York Times wrote of his playing in the EOS production of Stravinsky's L'Histoire du Soldat “...superb playing by Joel Pitchon....”

He has appeared on numerous radio and television broadcasts including WGBH, WNYC and PBS. Mr. Pitchon was featured on the TV3 Catalunya program Cadencia, and has been interviewed about his work for The Strad magazine. He has recorded for Deutsche Grammophon, CBS Masterworks and Vox Cum Laude, among others. Recordings include a CD of four Sonatas for violin and piano by Clifton J. Noble, with the composer at the piano for the Gasparo label New England Legacy, with pianist Jonathan Bass of works by Quincy Porter, Walter Piston and Amy Beach, also recorded for the Gasparo label; Sun Threads, a recording of the chamber music of Augusta Read Thomas, made with the Walden Chamber Players, is available on the ARTCD label; works of composer Donald Wheelock, also with the Walden Chamber Players, is available on the Albany label, and a further edition of works by Piston, Perera and Bernstein for piano trio will soon be released on the Bridge label.

All tracks are recorded in Smith College’s Sweeney Concert Hall.