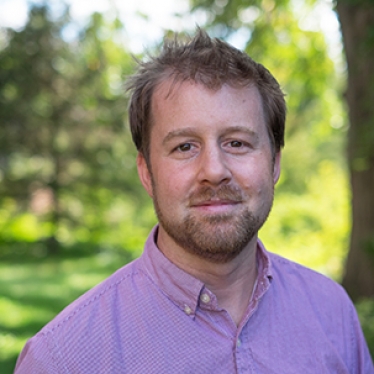 Jesse Bellemare’s research focuses on questions in plant ecology, biogeography and evolution at a variety of spatial and temporal scales. In particular, he is interested in how historical processes, such as past climate change and dispersal limitation, might influence plant species’ contemporary distributions and the diversity of plant communities. This line of research is set in the context of foundational concepts in ecology, such as the ecological niche, but also has implications for species conservation in the face of modern climate change. For example, might it be appropriate to consider “managed relocation” or “assisted migration” for dispersal-limited plant species still recovering from past climate change and unlikely to keep pace with anthropogenic climate change? Most of the Bellemare lab’s research is centered in the temperate deciduous forests of the eastern United States, using forest herbs, shrubs and tree species as topics for investigation.

In plant ecology and biogeography, the lab is using a range of techniques to investigate how plant species’ distributions at geographic scales might be influenced by climate, soils, ecological interactions and dispersal limitation. For example, large-scale seed-sowing experiments test how plant species perform within and beyond their natural range boundaries and under novel climatic and environmental conditions. In parallel, this work has also involved field surveys to examine how natural populations differ in performance and structure from species’ range centers to range edges. At equilibrium, ecological models typically predict peak performance near range centers, with declines toward range edges as species reach their ecophysiological limits.

More recently, the lab has begun to use information from native plant horticulture to explore how frequently and under what conditions plant species can already be found growing outside their native ranges and under novel environmental conditions. Such occurrences have the potential to highlight species’ tolerances to climate and environmental conditions, beyond those inferred from the species’ native range alone. For some plant species, the mismatch between native range, or realized niche, and actual tolerances appears to be quite substantial. To some extent, this line of research views native species’ grown outside their native ranges in horticultural plantings as “accidental experiments” in biogeography. What might be lacking in terms of formal experimental design is counterbalanced by the large numbers of plant species involved in horticulture, the broad extent of horticultural plantings across many regions, and the substantial timeframes involved—more than would ever be possible for any individual ecologist or research team. Even more strikingly, many native plant species have been documented to escape and naturalize beyond their natural ranges, providing compelling evidence that these species’ native ranges might have been limited by dispersal rather than climatic or other environmental factors. In one striking case, we have documented that the southeastern United States native tree Magnolia tripetala is beginning to escape from horticulture and naturalize in western Massachusetts, possibly as a result of recent climate warming in the region.

On a local scale, the lab is also involved in an ongoing study of forest ecosystem ecology and environmental change at Smith College’s Ada and Archibald MacLeish Field Station in Whately, Massachusetts. At this site we are investigating how forest ecosystems and forest floor communities might be changed as a key foundation species, the evergreen conifer Eastern Hemlock (Tsuga canadensis), declines due to attack by exotic insects. Research students based in the lab have investigated effects of changing forest canopy conditions on understory bryophyte species, soil organic layer conditions and fungal communities, as well as evidence of ecological interactions between forest floor animals.

Jackson, M.R. and J. Bellemare. 2018. “The potential for indirect negative effects of exotic insect species on a liverwort, Bazzania trilobata (Lepidoziaceae), mediated by the decline of a foundation tree species, Tsuga canadensis (Pinaceae).” Journal of the Torrey Botanical Society 145: 183-194.

Bellemare, J., B. Connolly, and D.F. Sax. 2017. “Climate change, managed relocation, and the risk of intra-continental plant invasions: A theoretical and empirical exploration relative to the flora of New England.” Rhodora 978: 73-109.

Bellemare, J., G. Motzkin, and D. R. Foster. 2002. “Legacies of the agricultural past in the forested present: an assessment of historical land-use effects on rich mesic forests.” Journal of Biogeography 29: 1401–20.