Musician in Dance & Co-Director of the MFA Program in Dance 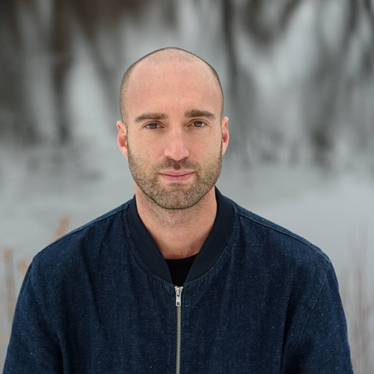 In 2018 he directed and produced the award-winning feature film Milford Graves Full Mantis. The New York Times called the film a “stunning documentary” and wrote, “this movie gives you the man’s heart, and it’s a beautiful one.” The film was released nationally in January 2018 and went on to receive an international release. In October 2018, Milford Graves Full Mantis was featured at the Smithsonian National Museum of African American History and Culture’s inaugural film festival in Washington, DC. It is now streaming worldwide.

Meginsky frequently collaborates with choreographers and has worked with Cori Olinghouse, Paul Matteson, Stuart Singer, Jennifer Nugent, Susan Sgorbati, Wendy Woodson and Nora Chipaumire. He has a longstanding artistic relationship with Gwen Welliver. Welliver, Singer and Meginsky premiered a new evening-length work, “On Its Face,” at Gibney Dance Center (NYC) in May 2018. Meginsky is the recipient of a New Music USA Live Music for Dance award for his original composition for Welliver’s Beasts and Plots, which premiered at New York Live Arts in 2013 and was restaged at the Guggenheim in April 2018. Prior to his appointment in the Smith dance department, Meginsky has worked as a dance musician for Bennington College, Amherst College, Mount Holyoke College and The American Dance Festival (ADF).

Meginsky’s current projects include the creation of a new music for contemporary dance digital resource platform; collaborations with choreographers Gwen Welliver, Elena Demyanenko and Susan Sgorbati; a new solo album, Trinities, on Poole Records; and new content for an upcoming release of Milford Graves Full Mantis on the Criterion Collection.