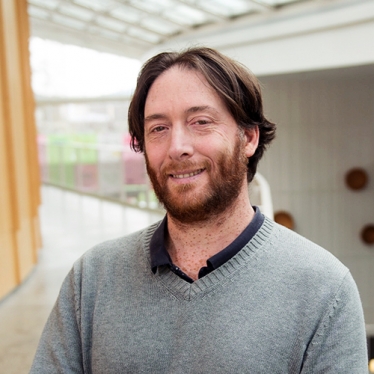 Gary Felder grew up in North Carolina. He studied physics at Oberlin College, took off three years to backpack around Europe, Israel and Central America, and then returned to school to get a Ph.D. in physics at Stanford University. His thesis work was with Andrei Linde on the early universe, which has been his main research focus ever since. After getting his doctorate, Felder did a two-year postdoc at the Canadian Institute for Theoretical Astrophysics in Toronto. He is married to Rosemary McNaughton and has two kids, James and Cecelia Felder.

Gary Felder is the co-author of two textbooks that he wrote with his brother Kenny Felder.

Gary Felder’s research uses computer simulations to study systems whose behavior is too complex to solve for with direct calculations. Examples have included the evolution of the early universe and wave propagation in the sun.

Felder’s current research is focused on a field called “quantum chaos.” Many systems display chaotic behavior, meaning a tiny change in the initial conditions can cause drastic changes in the behavior of the system. Examples include the weather (perhaps a butterfly flapping its wings could cause or prevent a hurricane), and turbulent flow of air and water. It’s currently an open question whether such chaotic behavior appears in the quantum realm of atoms and particles.

While this sounds highly technical, many of these problems could be (and have been) approached by undergraduates at all levels with an interest in learning computational physics.

LATTICEEASY: Working together with Igor Tkachev of CERN, Felder developed a C++ program for doing lattice simulations of interacting scalar fields, which has been used for a number of research projects in early-universe cosmology. The program is freely available on the Web, including documentation. In November 2007 Felder released CLUSTEREASY, a parallel computing version of LATTICEEASY.

FFTEASY: In May of 2000 Felder wrote a series of C functions for calculating Fast Fourier Transforms of real or complex data in any number of dimensions.

CurvedLand: Stephanie Erickson and Gary Felder developed a mapping program to illustrate curved geometry. You can place objects and navigate around them like you would in a mapping program like MapQuest or Google Maps, but as you move the objects around you appear to move in curved paths because of the geometry of the space.

Science for the General Public

Gary Felder wrote and recorded 12 lecture video course on the early universe for "The Great Courses."

One of Felder's hobbies is writing papers on scientific topics which he believes should be accessible to people with no math or science background. These papers are hosted on the Math and Physics Help Home Page maintained by Gary Felder's brother. Following are a few direct links to papers.

The Expanding Universe
This paper is an introduction the the big bang model of the universe, including what it means to say the universe is expanding and what we mean by "The Big Bang."

Beyond the Big Bang: Inflation and the Very Early Universe
This paper discusses some of the problems with the standard big bang model and how cosmologists have solved these problems with a theory known as "inflation." As the paper explains, inflation doesn't replace the big bang model but rather supplements it.

Quantum Mechanics: The Young Double-Slit Experiment
Gary and Kenny Felder co-authored this paper, which introduces the basic concepts of quantum mechanics. For illustration they use the famous double-slit experiment, which shows how matter acts both like particles and like waves.

Quantum Mechanics: What Do You Do with a Wavefunction?
Another collaboration, this paper is the only one in the bunch that requires a physics background. It is designed for people who are taking or have taken a course in quantum mechanics and want some help pulling all the ideas and the math together to see the big picture.

Spooky Action at a Distance: An Explanation of Bell's Theorem
This paper outlines Bell's proof that the experimental results of quantum mechanics can only occur if particles can instantly affect each other at large distances. As with all these papers, no math or science background is necessary.

Things Fall Apart: An Introduction to Entropy
Everyone from physics students to readers of popular science literature has heard that entropy is a measure of disorder and that it always increases in the universe. In this paper Felder explains what entropy is and why it always increases. Put another way, this paper explains why some processes in nature are irreversible.

Bumps and Wiggles: An Introduction to General Relativity
As the title suggests, this paper introduces some of the basic ideas of Einstein's General Theory of Relativity: curved spacetimes, black holes and more. This one might be best read after Felder's brother's paper on special relativity.

Physicist Gary Felder explains why the discovery of gravitational waves, first detected in September 2015 but predicted by Albert Einstein a century ago, was an enormous historic event.