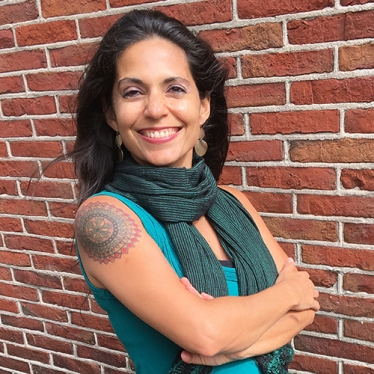 Flávia Santos de Araújo is a literary and cultural studies scholar with teaching and research interests in African diaspora women’s writings and cultural production. She holds a doctorate and a master’s degree in Afro-American studies from the University of Massachusetts Amherst, and a master’s and a bachelor’s degree in literature, Portuguese and English, from the Federal University of João Pessoa (Brazil). She is a Fulbright-Brazil Research Fellow (2008–12).

Araújo’s research focuses on contemporary representations of the black female body in literature and visual culture by black women artists of the Americas—particularly artists from the United States, the Caribbean and Brazil.

Araújo’s teaching and research involves transnational, intersectional and interdisciplinary approaches to the study of U.S. African American/African diaspora cultural production and theory. Her pedagogy is shaped by her community-based education training with a social justice framework. At Smith, her teaching includes topics on U.S. African American literature and culture, African diaspora women’s literature, Afro-Brazilian literature and culture, and women of color feminisms.

Araújo's profile and publications can also be accessed on ORCID.

Araújo’s book manuscript, tentatively titled Towards a Poli(poe)tics of Embodiment: Black Women, (Self)Representation, and Cultural Diasporic Production, explores the transnational politics of gender, race, sexuality, national identities and (self)representation in the cultural production by contemporary black women artists across the diaspora in the Americas.

“'blessed within my selves': The Prophetic Visions of Our Lorde." Wagadu: A Journal of Transnational Women's and Gender Studies (forthcoming spring 2019)