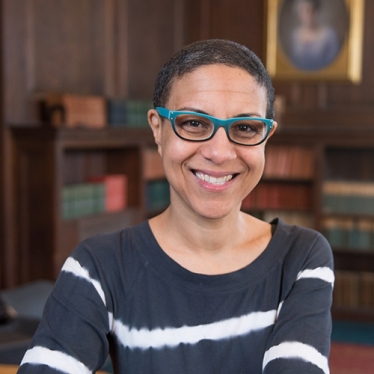 Elizabeth Stordeur Pryor specializes in 19th-century U.S. history and race. Her first book, Colored Travelers: Mobility and the Fight for Citizenship before the Civil War, is a social history of black activists who, long before Rosa Parks refused to give up her seat on a Montgomery bus, fought against segregation on public vehicles. Pryor argues that their protest elevated the cars, compartments and cabins of public transportation to the frontlines for the battle over equal rights in the 19th century. Her essay, “The Etymology of [the N-word]: Resistance, Language, and the Politics of Freedom in the Antebellum North,” won the Ralph D. Gray Prize for the best article of 2016 in the Journal of the Early Republic. Her next project, inspired by the article as well as her teaching at Smith College, is a historical and pedagogical study of the n-word framed, in part, by her experience as a biracial woman in the United States.

In the classroom, Pryor is interested in questions of citizenship, race and racism and the history of U.S. slavery, looking carefully at how enslaved people's histories are remembered and who remembers them. Her classes are designed to help students make connections between the anti-blackness of the past and in the present. She is a recipient of a 2011 student-government teaching award and, in 2016, the Sherrerd Prize for Distinguished Teaching at Smith.

Colored Travelers: Mobility and the Fight for Citizenship before the Civil War (Chapel Hill: University of North Carolina Press, 2016).