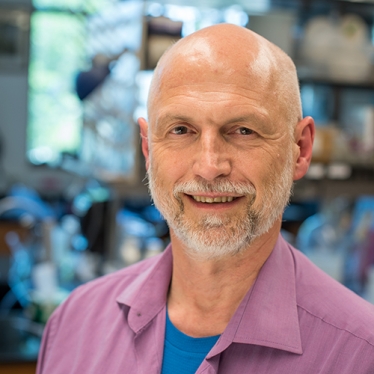 David Bickar’s research has diverged into three distinct areas. The first focuses on the mechanisms of electron transfer and oxygen reduction, and the proteins that catalyze these reactions. Much of his study has been on the enzymes of the mitochondrial electron transport pathway.

The second area of research is to identify the mechanism by which a group of structurally similar compounds are selectively toxic to the neurons in one small region of the brain. The death of these neurons results in Parkinson’s disease, and exposure to these compounds can cause the onset of symptoms that are similar or identical to those of classical parkinsonism, except in young victims.

Bickar’s last area of study is the design and preparation of self-organizing chemical systems based on the ligand affinities and coordination properties of metal complexes. Such systems may provide information about key steps in the origin of life.

Bickar, D., Turrens, J. and Lehninger, A., "The Mechanism by Which Oxygen and Cytochrome c Increase the Rate of Electron Transfer from Cytochrome a to Cytochrome a3 of Cytochrome Oxidase," The Journal of Biological Chemistry, 261, 14461-14466 (1986).