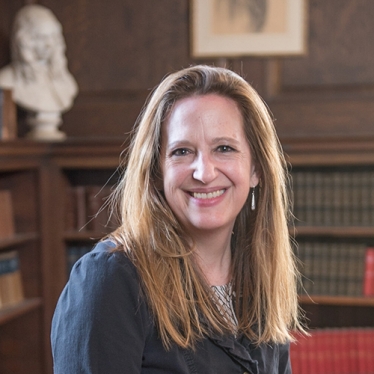 Cornelia Pearsall is a professor of English at Smith. She is also affiliated faculty in the Program for the Study of Women and Gender, and serves on the advisory boards of the Kahn Liberal Arts Institute, the Department of Statistics and Data Science, and three concentrations: Archives, Book Studies, and Poetry. She earned her bachelor’s, master’s, and doctoral degrees from Yale University. She is the recipient of various grants and fellowships, including a National Endowment for the Humanities Fellowship, an American Council of Learned Societies grant, and the Mellon Fellowship in the Humanities.

Her book Tennyson’s Rapture: Transformation in the Victorian Dramatic Monologue (Oxford), is a recipient of the Sonia Rudikoff Prize for best first book in Victorian Studies. Tennyson’s Rapture investigates some of the poet’s major works within such seemingly disparate and yet surprisingly intertwined contexts as nineteenth-century classical scholarship, rapture theology, reform politics, and sexological theory. Readers of dramatic monologues have tended to hear in them gratuitous speech that is unintentionally self-revealing. Pearsall argues instead, with regard both to this poet and the genre more broadly, that these efficacious, intentional speech acts seek to provoke a range of momentous transformations.

Pearsall is currently completing two book projects. The first, Firing Lines: War Poetry and the Force of Form from Tennyson to Plath, studies intersections of measure and the martial from the Crimean War to the Cold War. If at some level physical destruction or its threat is a defining element of war, then its most urgent poetry conveys this, she shows, at the level not only of theme but of form, through the materiality and even brutality of lyric representation. The book’s six chapters focus on a range of poems articulating operations of force, specifically allying technologies of warfare with the technics and ethics of war poetry.

Imperial Tennyson, her other current book-length project, works closely with an intricately connected network of poems and political documents spanning the decade of the Laureate’s widest national and global influence, from his elevation to the peerage to his death in 1892. Drawing on substantial archival research in order to read more comprehensively the dense interrelation of these poems to acts of imperial aggression, she situates them within a sequence of pivotal events, including vigorous national debates over Irish Home Rule, the death of General Gordon in Khartoum, and the annexation of Upper Burma.

Pearsall is also producing a new Norton Critical Edition of Tennyson’s Selected Poetry (under contract). She has published articles on authors such as W. H. Auden, Robert Browning, Keith Douglas, Sylvia Plath and Virginia Woolf. Forthcoming essays include “Burying Bertha: Race and the Ungraveable Body in Jane Eyre” and “Little Dorrit’s Dead Letter and the Ash of the Archive.”

At Smith, Pearsall teaches a variety of courses, including a first year seminar on ghosts and both semesters of the English Literary Tradition (essentially spanning from Beowulf to Virginia Woolf). Her classes on literature and culture include recent seminars on The Brontës, Mourning and Memorialization in the Victorian Period, and War Poetry. Courses cross-listed in SWG include Victorian Sexualities and Bloomsbury and Sexuality.

Beyond Smith, Pearsall has given numerous conference and keynote lectures in the U.S. and abroad, including invited presentations at the Dickens Universe at UC Santa Cruz, the Townsend Center for the Humanities at UC Berkeley, the Research Seminar at the University of Manchester (U.K.) and the CUNY Victorian Conference (2008 and forthcoming 2019).