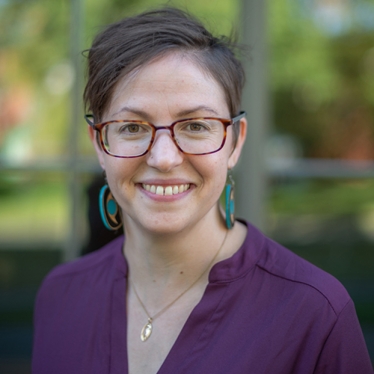 The Author's Corner with Christen Mucher

Christen Mucher specializes in early American studies, Native and Indigenous studies, and early archaeology and anthropology. Her research centers on past-making, historiography, gaps in the archive, and archival theory in the Americas. She has a particular interest in Indigenous histories of the Ohio and Mexico valleys and museum collections in Haiti, the United States, Mexico and France.

Mucher teaches courses on early American history and culture, Native studies before 1880, empire and settler colonialism, as well as museum and archives studies. She is an adviser and affiliated faculty for the Five College Certificate Program in Native American and Indigenous Studies and is affiliated with the Archives and Museums concentrations at Smith. Mucher is also the director of the Smith College Internship Program at the Smithsonian Institution.

Mucher's monograph, Before American History: Indigenous Dispossession and National Mythmaking (UVA 2022), addresses archaeology, history writing and Indigenous dispossession in Mexico and the United States during the late colonial and early national periods (1780s–1840s). The collection she co-edited with Gesa Mackenthun, Decolonizing "Prehistory": Deep Time and Indigenous Knowledges in North America (UAP 2021) includes her essay on historical demography, genomics, and "ancient Americans."  Her co-translation and critical edition of Stella, the first Haitian novel, was published by NYU Press in 2015. The novel was written by Haitian author Émeric Bergeaud and originally appeared in French in 1859. The second edition is available from the Digital Library of the Caribbean. Her article “Collecting Native America: John Lloyd Stephens and the Rhetorics of Archaeological Value” was published in 2018 in the Journal of Transnational American Studies.

Mucher’s research has been generously supported by the American Antiquarian Society, the Newberry Library, the New-York Historical Society, the National Endowment for the Humanities and the Andrew W. Mellon Foundation.

“Collecting for Salvation: American Antiquarianism and The Natural History Of The East,” Commonplace: the Journal of Early American Life (October 2022)

“Conceptual Traffic: The Atlantic Slave Trade and the Historiography of 1812,” in Warring for America: Cultural Contests in the Era of 1812, Nicole Eustace and Fredrika J. Teute, eds. University of North Carolina Press, 2017

“Haiti’s First Novel: Expanding the Study of the Age of Revolutions” (with Lesley S. Curtis), The 18th-Century Common, September 2015