Associate Professor of Anthropology, Director of the Sherrerd Center for Teaching and Learning 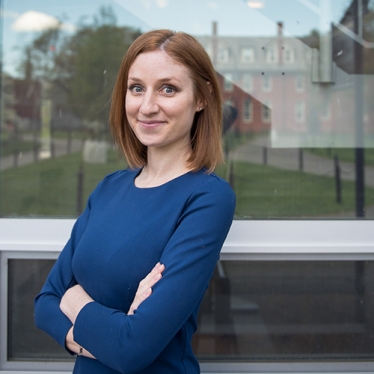 Caroline Melly is a sociocultural anthropologist with expertise in urban studies, science and technology studies, and disability studies. She is particularly interested in contributing to a public-facing anthropology that sees scholarship as a tool for a feminist, decolonial, and anti-ableist politics. She has conducted ethnographic research in West Africa, Europe, and the United States.

Melly has conducted research in Dakar, Senegal, with the support of the National Science Foundation and the Fulbright-Hays program. Her first book, Bottleneck: Moving, Building, and Belonging in an African City, was published by the University of Chicago Press in 2017. It received the Anthony Leeds Prize in Urban Anthropology in 2018. The book introduces the embouteillage—the traffic bottleneck—as an ethnographic point of departure and as a theoretical lens for making sense of everyday life and policy-making in Dakar. Her ethnographic itinerary involved an internship at the national investment promotion agency, which was looking to create a program for migrants to invest; mobile interviews with cab drivers navigating the city; and extensive work with return migrants, investors, and residents who considered themselves excluded from transnational networks. Her work has also been published in academic journals such as Cultural Anthropology, American Ethnologist, Comparative Studies in Society and History, City & Society, and Africa, and in media outlets such as openDemocracy.com and Limn.

Melly’s newer research focuses on the making of modern cannabis medicine. Tentatively titled Unsettling Science: Making Cannabis Medicine at the Ends of Prohibition, this research considers the profoundly embodied and painstaking work of tinkering that cannabis science demands. While many stories of scientific knowledge production tend to privilege certain actors and spaces as properly "scientific," this study reorients attention toward a collective of unlikely experts and surprising alliances that are helping to forge a new kind of science, one that unsettles many of our suppositions about scientific truth-making. In doing so, it contributes to interdisciplinary conversations about expertise and discovery; disability, race, and gender; human-plant relations; care and kinship; and neuroscientific inquiry.

Melly currently serves as the Director of the Sherrerd Center for Teaching and Learning at Smith, where she is committed to working with faculty and teaching staff to build more equitable and inclusive pedagogies. She teaches courses on topics such as disability and difference, citizenship and belonging, visual anthropology, anthropological methods, urban space and cities, digital life, science and technology, contemporary debates about cannabis, and Africa and its diaspora. She was a recipient of the Sherrerd Prize for Distinguished Teaching in 2014 and a Rally Day Teaching Award in 2012.