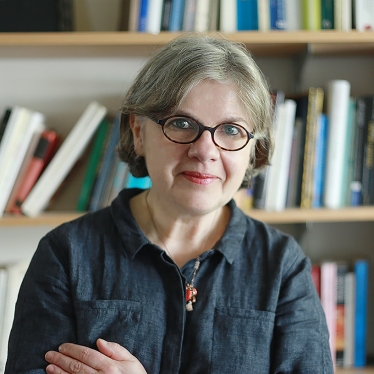 Brigitte Buettner joined Smith in 1990. She is originally from Switzerland and studied in Paris. Prior to moving to Northampton, she worked as a collection specialist in the photo archive of the Getty Center in Los Angeles.

Buettner wrote her dissertation on an early 15th-century French illuminated manuscript of Giovanni Boccaccio’s On Famous Women (published as a College Art Association monograph in 1996). After writing several essays on late medieval manuscripts in a courtly context, and a focus on gift-giving rituals in particular, her attention has shifted to the sumptuary arts and to questions of materiality. That research, supported by the American Philosophical Society, the Mellon Foundation and the National Endowment for the Humanities, has yielded articles and a book that engages in a cross-disciplinary examination of the role of precious stones in medieval art, secular social practices and the production of scientific knowledge. She is currently preparing a co-edited volume on Medieval Art, Modern Politics, the first chapter of a new scholarly endeavor concerned with the instrumentalization of medieval art from the Napoleonic to the Nazi era.

She teaches the full spectrum of European medieval art courses and regularly participates in the Art Department's cross-cultural, transhistorical introductory course, Art and its Histories.

“Toward a Historiography of the Sumptuous Arts.” In A Companion to Medieval Art: Romanesque and Gothic in Northern Europe, ed. Conrad Rudolph, 2nd rev edition. Hoboken: Wiley & Sons, 2019, 657–80.