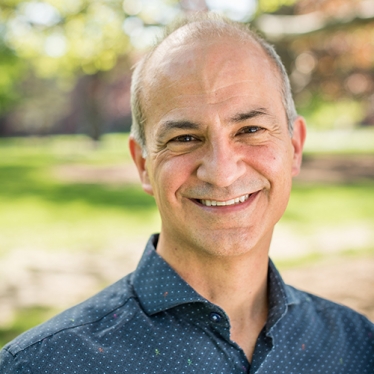 For the last 25 years, Andy Rotman has engaged in textual and ethnographic work on the role of narratives, images and markets in South Asia and the religious, social and political functions that they serve. This focus is apparent in his research on early Indian Buddhism, South Asian media and the modern economies of the North Indian bazaar.

His recent publications include Amar Akbar Anthony: Bollywood, Brotherhood, and the Nation (Harvard University Press, 2015), co-written with William Elison and Christian Novetzke, which offers a multiperspectival exegesis of one of India’s most popular films; Thus Have I Seen: Visualizing Faith in Early Indian Buddhism (Oxford University Press, 2009), which considers the construction of faith as a visual practice in Buddhism, and how seeing and believing function as part of intersecting visual and moral systems; and Divine Stories: Translations from the Divyāvadāna, part 1 (Wisdom Publications, 2008), the first half of a two-part translation of an important collection of ancient Buddhist narratives. This volume inaugurated a new translation series from Wisdom Publications called Classics of Indian Buddhism, of which he is also the chief editor. The second volume, Divine Stories: Translations from the Divyāvadāna, part 2, was published with Wisdom Publications in 2017.

Rotman's current research focuses on two book projects, both of which explore the intersection of religion and the market, and the role of mercantilism in creating and resisting moral worlds: (1) Bazaar Religion: Marketing and Moral Economics in Modern India (Harvard University Press, under contract), a longitudinal study of the main bazaars in Varanasi, which examines the moral economy behind the objective economy of visible transactions and the ways that it creates, mediates and sacralizes various moods and modes of behavior; and (2) Saving the World through Commerce? Buddhists, Merchants, and Mercantilism in Early India, which chronicles the close relationship that Buddhism had with merchants and mercantilism in the early centuries of the Common Era, and how the market left its imprint on the foundations of Buddhism, particularly on Buddhist conceptions of morality.

Rotman's courses are concerned with South Asian religion, both premodern and modern, and though he believes that religious studies offer an important heuristic for penetrating the complexities of many social phenomena, he likes to teach materials from a variety of disciplines as a way of triangulating issues. He was trained to examine problems as a scholar of religion and as a philologist, anthropologist and cultural historian, and he trains his students to do the same. Rotman also likes to use nontraditional media in the classroom, such as chromolithographs, advertisements, video archives and devotional recordings to offer insight into under-represented aspects of South Asian religious life, contextualize traditional materials and animate discussions.

"Buddhism and Hospitality: Expecting the Unexpected and Acting Virtuously." In Housing the Stranger: Between Religions, edited by Richard Kearney and James Taylor, 115–122. New York: Continuum, 2011.

“The Hungry Ghosts Among Us.” With James Shaheen. Tricycle: The Buddhist Review. July 14, 2021.

“The Divine Stories of Early Buddhism.” With Daniel Aitken. The Wisdom Podcast. April 10, 2017.

"Liberation through Images: Seeing the Buddha in Indian Art and Architecture." Lecture at Boston College, in conjunction with Asian Journeys: Collecting Art in Post-War America, an exhibit at the McMullen Museum of Art, April 2010.