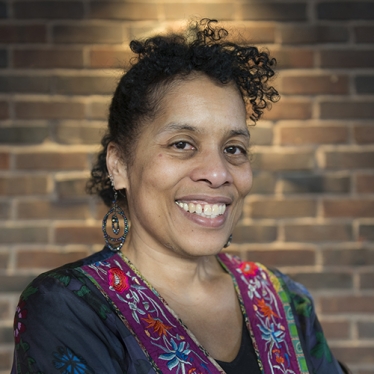 Andrea Hairston  is the artistic director of Chrysalis Theatre and has created original productions with music, dance, and masks for over thirty-five years. Her plays have been produced at Yale Rep, Rites and Reason, the Kennedy Center, StageWest, and on Public Radio and Television. She has translated plays by Michael Ende and Kaca Celan from German to English. Ms. Hairston has received many playwriting and directing awards, including a National Endowment for the Arts Grant to Playwrights, a Rockefeller/NEA Grant for New Works, an NEA grant to work asdramaturge/director with playwright Pearl Cleage, a Ford Foundation Grant to collaborate with Senegalese Master Drummer Massamba Diop, and a Shubert Fellowship for Playwriting.

Since 1997, her plays produced by Chrysalis Theatre, Soul Repairs, Lonely Stardust, Hummingbird Flying Backward, and Dispatches have been science fiction plays. Archangels of Funk, a sci-fi theatre jam, garnered her a Massachusetts Cultural Council Fellowship for 2003. Her latest play, Thunderbird at the Next World Theatre, appears in Geek Theater—an anthology of science fiction and fantasy plays in published by Underwords Press in 2014.

Hairston has given many talks and published numerous critical essays on Octavia Butler, speculative theatre and film, and popular culture. In 2011, she received the International Association of the Fantastic in the Arts Distinguished Scholarship Award for contributions to the scholarship and criticism of the fantastic. Lonely Stardust: Two Plays, a Speech, and Eight Essays was published by Aqueduct Press in 2014.

"Griots of the Galaxy," a short story, appears in So Long Been Dreaming: Postcolonial Visions of the Future, edited by Nalo Hopkinson and Uppinder Mehan. A novelette, "Saltwater Railroad," was published in July 2015 by Lightspeed Magazine.

Three novels have been published by Aqueduct Press: Will Do Magic for Small Change (2016), Redwood and Wildfire (2011) and Mindscape (2006).