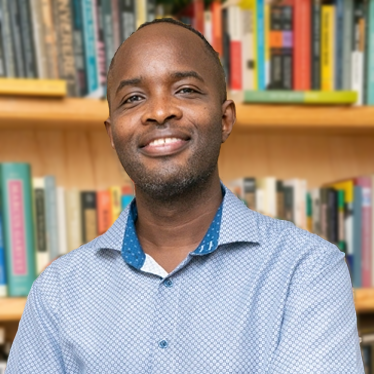 Aaron Kamugisha is a scholar of the social, political and cultural thought of the African diaspora. He holds a doctorate in social and political thought from York University, was the 2007–08 postdoctoral fellow in African American studies at Northwestern University, and has taught at the University of the West Indies, Cave Hill Campus for over a decade. He serves on the editorial boards of the following journals: Small Axe: A Journal of Caribbean Criticism, Social and Economic Studies, and the Journal of West Indian Literature. He is also the co-executive director of the Race and Resistance book series with Peter Lang Publishers, and an inaugural member of the Other Universals transnational research collective.

His primary intellectual and research interests encompass the intellectual history and the social, political and cultural thought of the African diaspora. His latest book, Beyond Coloniality: Citizenship and Freedom in the Caribbean Intellectual Freedom, was published by Indiana University Press, with a simultaneous edition by University of Witwatersrand Press in March 2019. He is the editor of five edited collections on Caribbean and Africana thought, including Caribbean Political Thought: The Colonial State to Caribbean Internationalisms (2013); Caribbean Political Thought: Theories of the Post-Colonial State (2013); (with Yanique Hume) Caribbean Cultural Thought: From Plantation to Diaspora 2013) and Caribbean Popular Culture: Power, Politics and Performance (2016); and (along with 14 other editors) The Routledge Reader in African American Rhetoric: The Long Duree of Black Voices (2018). He has also edited special issues of five journals: (with Alissa Trotz) a special issue of Race & Class (October 2007); “Caribbean Trajectories: 200 Years On” to commemorate the 200th anniversary of the British abolishment of the slave trade; (with Peter Hudson) The C.L.R. James Journal special issue on Black Canadian Thought (Fall 2014); Small Axe 49 (March 2016) on Sylvia Wynter’s Black Metamorphosis; (with Jane Gordon, Lewis Gordon and Neil Roberts) The Antigua and Barbuda Review of Books (Summer 2017); and Small Axe 64 (March 2021) on Caribbean intellectual history.

Editor of a special issue of Small Axe: A Caribbean Journal of Criticism 64 (March 2021) on Caribbean Intellectual History