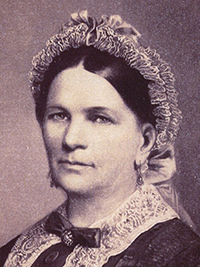 Born on August 27, 1796 in Hatfield, just a few miles from Northampton, Sophia was the fourth of seven children—and the first daughter—of Joseph Smith, a prosperous farmer, and his wife, Lois White Smith.

Few family records survive, so little is known about Sophia Smith's early years. Her journal, which she kept for the last nine years of her life, is primarily a record of her spiritual development but also includes discussions of events of the day, her trips, and the books she was reading.

Like many girls of her era, Sophia was given a meager education, yet she read avidly and widely throughout her life. Such passion—which included poetry and prose, newspapers and magazines of social, political and literary commentary—not only portended her future contributions but may also have helped her endure the tragedies of adulthood.

Of the seven Smith offspring, three died young and only Joseph Jr. married, producing no heirs. Sophia, her sister Harriet and brother Austin shared the family homestead, which still stands at 22 Main Street in Hatfield. Moreover, by the age of 40, Sophia had become quite deaf, and even the use of an ear trumpet did not counter the growing isolation that her hearing loss engendered in the years to follow. She underwent several operations to correct the problem, but these were all unsuccessful.

Sophia's father, Joseph, was both prosperous and frugal. After his death, his son Austin shrewdly invested his inheritance in the New York stock market and often traveled there to watch the Smith assets grow. Back in Hatfield, Austin was reputed to be a miser devoid of community spirit. He argued at town meetings against the extravagance of public education and was said to pay board to his sisters to manage the household—and then charged them a shilling for a ride in the family carriage.

At least Austin seemed to come by his penurious ways honestly. His uncle, Oliver Smith, was also renowned in Hatfield for his parsimony. For instance, the elder Smith is said to have employed the village tailoress to turn his coats wrong side out and remake them. Then, when he died, he left a half-million dollars to charity. The Smith Charities is still in operation today, housed in a handsome brownstone building at 51 Main Street in Northampton. Smith Vocational and Agricultural High School, serving students throughout Hampshire County, is also the result of Oliver's benevolence.

Harriet Smith's death in 1859, followed by Austin's in 1861, left Sophia wealthy but alone. Her story—up until this point—features few variations or opposing theories. It is only here, as she began to plan for the final dispensation of the Smith family fortune, that the tale becomes less clear.

Deeply religious, Sophia turned to her pastor, John Morton Greene, as well as other advisers, to discuss her decision. Among the options considered were bequests to Amherst College (Reverend Greene's alma mater) and to the nearby Mount Holyoke Female Seminary, which—although not a full-fledged college—was already educating young women.

Initially, Sophia settled on a variety of projects, including a school for the deaf—a logical choice in light of her own struggles with impaired hearing. Thus, Smith College may, at least in part, owe its very existence to the fact that John Clarke died before she did, endowing a school for the deaf (today the acclaimed Clarke School in Northampton) and prompting Sophia to abandon her plan.

The "Last Will and Testament of Miss Sophia Smith" was not completed until March of 1870—only three months before she died but nine years (and many revisions) after her first meeting about the matter with John Greene. This final version supported "the establishment and maintenance of an Institution for the higher education of young women, with the design to furnish for my own sex means and facilities for education equal to those which are afforded now in our Colleges to young men."

The will went on to state: "It is my opinion that by the education of women, what are called their 'wrongs' will be redressed, their wages adjusted, their weight of influence in reforming the evils of society will be greatly increased, as teachers, as writers, as mothers, as members of society, their power for good will be incalculably enlarged...

"It is my wish that the institution be so conducted, that during all coming time it shall do the most good to the greatest number. I would have it a perennial blessing to the country and the world."

Smith College was chartered in 1871 and opened in 1875. While most would agree that the college embodies the values and vision inherent in its earliest blueprint, some scholars question whether Sophia Smith herself conceived this pathbreaking plan or whether she merely endorsed an idea proposed by Reverend Greene. The wording of the will may likewise be Sophia's own—or may not be. And while Sophia Smith has been described as yielding and submissive, there is evidence that her interest in women and their academic aspirations was genuine and long-standing.

John M. Greene outlived his parishioner by 50 years and recorded the history of the development of the college as he remembered it. The trustees appointed in Sophia's will, including Greene, and the president they hired, L. Clark Seelye, built the college using Sophia's vision as its foundation, and the new institution grew rapidly to be one of the largest and most respected colleges for women in the world.