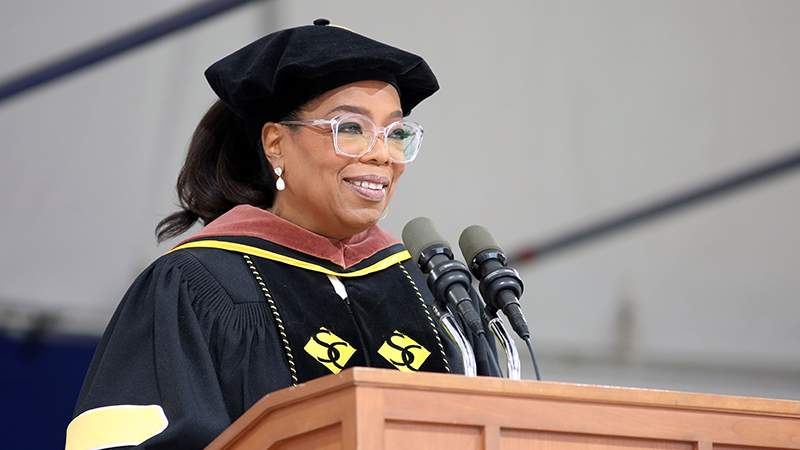 In her Smith College Commencement address, global media leader Oprah Winfrey urged Smith’s class of 2017 to live with intention, and to seek fulfillment by “shifting the paradigm to service.”

“This understanding that there is an alignment between who you are and what you do is the real, true empowerment,” Winfrey said.

Winfrey said it was a special honor to speak at the graduation of Morgan Mpungose ’17, a graduate of the Oprah Winfrey Leadership Academy for Girls in South Africa and one of the young women Winfrey calls her “daughters.” Offering a special shout out to Mpungose’s mother, whose trip to Northampton marked her first time on an airplane, Winfrey spoke warmly about Mpungose’s growth—and that of all of the day’s graduates.

“As I watched the sun rise this morning, I watched the golden hue prick the surface of the horizon, and then extend and expand its warming glow over an already beautiful Northampton, and I thought of it as an allegorical symbol of what’s happened here at Smith these past four years with my daughter Morgan and with every other daughter of Smith,” Winfrey said. “I’ve watched Morgan blossom, and I’ve seen her flourish. She came here a young girl from a tiny community in Durban, South Africa, and she learned to thrive here at Smith, living abroad for a year and studying architecture in Copenhagen. She came here as an articulate, ambitious, open-to-learning, kind and giving girl from my school. And Smith, you are giving her back to us as an exquisitely developed, cooperative, curiously inquisitive, open and global-minded woman for the world.”

“She came here praying that she’d measure up,” Winfrey added. “She leaves confident and assured, with her heart on fire to serve a cause greater than her own.”

Winfrey said Mpungose’s graduation was a fulfillment of the dream she’d had when she opened her leadership academy some 10 years ago. Visiting South Africa to deliver clothes and toys, Winfrey created the academy after spending 10 days with Nelson Mandela. “Having been raised a poor girl myself, I know the power of education,” she said. “Because I believe that when you educate a girl, you’re not just educating her, you’re educating her to create opportunities for her family, for her community and eventually the world.”

Winfrey said Smith had taught graduates the power of service—something she had experienced in her own life. A turning point in her career came, WInfrey said, when she decided “I would no longer be used by television; I would use television to create a platform that could be of service to its viewers.” Winfrey vowed to use every show to “inform, to encourage, to inspire, to uplift and entertain.”

And that, Winfrey said, is a key to her success. “This understanding of the alignment between who you are and what you do is authentic empowerment,” Winfrey said. “The only empowerment is when you use who you are—what you’ve been given, the gifts you hold—to serve. The secret is: How do you use your self—your full, open self; your being and expression—as a full, open prayer to life?”

Being open to others requires caring for yourself, Winfrey noted—something that’s particularly challenging for women. “You have to give yourself top priority,” Winfrey said, “to fill up your life with a full, emboldened spiritual life that gives back to you. I don’t mean a religious life--I mean nurturing and taking care of that essence, that fullness of expression that is you, with a capital ‘Y.’”