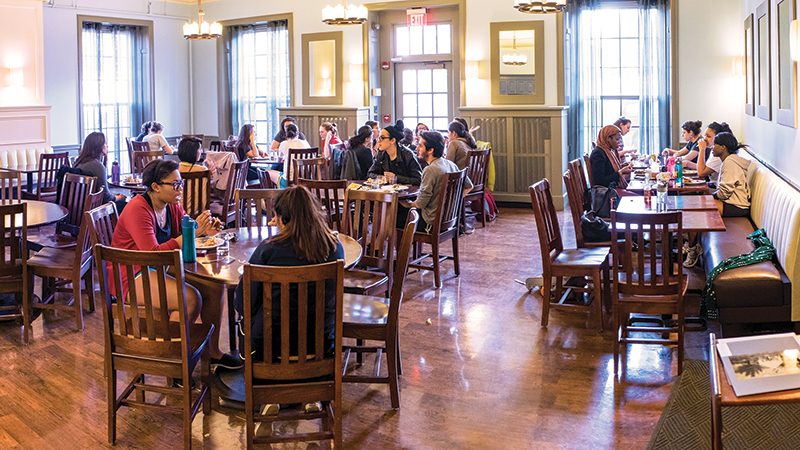 In May 2019, the Residential Experience Working Group submitted its initial report on dining in community to President McCartney and the board of trustees. The report outlined recommendations on improving community within Smith’s dining system to positively impact a student’s ability to engage with communities college-wide and feel a sense of belonging.

At its October 2019 meeting, the board of trustees approved moving forward with a technical feasibility study that would identify options for improved dining and operational enhancements.

In the past, dining was instrumental in bringing everyone together. Now, for a variety of reasons, Smith's existing dining options have become less effective in creating community. In fact–due to personal tastes, student schedules and dietary restrictions (e.g., gluten-free, vegan, vegetarian, kosher, halal, etc.)–students may need to pick up food from various dining locations on campus.

These case studies draw from multiple student experiences provided during the REWG’s work. They are meant to represent actual challenges faced by Smith students today as they navigate the dining experience.

A group of friends eat dinner together every week after a study group session. They base their weekly choice of dining room on the multiple menu choices available across 15 locations.

One week, mini cannoli (a student favorite) are on the dessert menu at three of the 12 dining rooms serving dinner that evening. The study group chooses Lamont House, one of the three serving cannoli.

Dozens of other groups have made the same decision, and there’s a rush on Lamont at 5:30. Dessert quickly runs out, and the kitchen staff hurries to prepare more, resulting in a long line of students. Meanwhile, other dining halls are faced with overproduction and significant waste.

Smith College wastes more food per student per year than any of its peers who track compostable waste by student per academic year.

As students find affinity beyond their house, they seek to (as Smith students always have) dine in community. Members of a theater production, seeking to eat together after rehearsal, must balance the cast and crew’s needs against the college’s offerings. For example: On this production, two members are vegan; one seeks a Halal menu, another a Kosher menu, and a fifth requires a gluten-free option. No single dining location will meet these needs, and the group is unable to dine together.

Under Smith’s distributed dining system, individual—but not all—dining locations can meet various dietary accommodations. Some are restricted—Dawes, for example, is only open to students with gluten sensitivities.

A Smith athletics team holds practices after class, often ending around 6 p.m. By the end of practice, students must either rush to the dining hall of their choice (most close at 7 p.m.) or eat at Tyler, the only dining hall open until 8:30 p.m. Tyler, though, cannot accommodate all dietary needs.

The same team often travels for games, returning to campus in the late afternoon or evening. As there is no food service between 1:30 p.m. and 5:30 p.m.—or after 7 p.m. (except Tyler), teams are forced to go off-campus for post-game meals. The athletics department often accommodates this by purchasing food that meets the needs of the entire team on the way home. Repeated across multiple teams on a regular basis, this leads to overproduction of food on campus, an additional cost for the athletics department, and lack of opportunity for athletes to dine in the community of their choice.

Even though dining room entrances are ADA compliant, dining areas may not be; students may not be able to navigate within the dining areas due to crowding and physical accessibility of serving areas.

Smith College wastes more food per student per year than any of its peers who track compostable waste by student per academic year.

Q: Why has Smith engaged a consultant to review its dining operations?
A: The college is committed to ensuring that its residential experience meets the needs and expectations of current and future students. These include accessibility, quality, choice and the opportunity to live and dine in community.

The consultant’s work is a result of the the Residential Experience Working Group’s examination of “How Smith, as an educational institution and a residential college, can most effectively optimize the potential of living and dining in community, in order to create an inclusive learning environment for all students.”

Q: What are Smith's current dining operations?
A: Smith currently has 15 dining rooms served by 12 residential kitchens. Across all meals and locations in a standard week, the college operates 181 individual meal periods.

Students with dietary restrictions are served by individual dining rooms:

Q: Are there any current plans to either close or open new dining areas?
A: No.

pounds of food waste per student, per year, on average—higher than UMass, Mount Holyoke and other colleges

hours of hot entrees served at Smith per day—far fewer than Amherst, Mount Holyoke and other colleges

The value of the food wasted at Smith per year, based on the EPA’s estimated value of $1.17 per pound of food waste