What the Constitution Means to Me: Screening and Discussion with Heidi Schreck

NORTHAMPTON, MA – The Smith College Department of Theatre presents What the Constitution Means to Me: A Virtual Screening and Discussion with Tony-award nominated playwright and actor Heidi Schreck on Thursday, October 7, at 7 p.m., as part of Smith College’s Year on Democracies. Schreck will discuss her journey from teen debate champion to Broadway sensation and how the Constitution can and must adapt to meet the needs of all citizens. If you are  interested in the live virtual event, please register.

Fifteen-year-old Heidi Schreck earned her college tuition by winning Constitutional debate competitions across the United States. In her hilarious, hopeful and achingly human show, Heidi resurrects her teenage self in order to trace the profound relationship between four generations of women and the founding document that shaped their lives. Called “Uproariously funny, wrenchingly moving, critically challenging and politically inspiring” by the New York Review of Books, Schreck’s Tony-award nominated play looks at the US Constitution, questioning its foundational principles, its effect on women’s rights, its complicated contribution to systemic racism, and, in this precarious moment, on our democracy.

In addition to touring theatre productions, What the Constitution Means to Me was produced by Amazon Video, directed by Marielle Heller and features Heidi Schreck, Mike Iveson and Rosdely Ciprian. The film was released prior to the 2020 election. Following Smith’s online screening of the film, Heidi will be joined in a Zoom conversation by Theatre faculty Ellen Kaplan and Len Berkman.

Heidi Schreck is a 2019 Pulitzer Prize Finalist and Tony nominated playwright, actor, and writer living in Brooklyn. In addition to What the Constitution Means to Me, which received Tony nominations for Best Play and Best Leading Actress in a Play (for Schreck herself), her plays include Grand Concourse, which debuted at Playwrights Horizons and Steppenwolf Theatre in 2014, Creature, There Are No More Big Secrets, and The Consultant. In television, as both an actress and a writer, her credits include: Nurse Jackie and Billions. Additionally, in television, she wrote and co-executive produced the Jill Soloway Amazon series I Love Dick. She currently has three television projects in development with Hulu/Big Beach, Hulu/Working Title and Amazon/Annapurna. Smith audiences will remember that her play Creature was produced by the Theatre Department in the fall of 2017.

This year Smith College is hosting an ambitious set of programs and events under the organizing theme “Year on Democracies.” This collegewide initiative is an opportunity to examine democracies around the world. The Heidi Schreck event is co-sponsored by the Lewis Global Center, the Jandon Center, the Kahn Institute and the Office of the Provost.

What the Constitution Means to Me: A Virtual Screening and Discussion with playwright Heidi Schreck.

As part of Smith’s Year on Democracies, playwright Heidi Schreck will offer a virtual screening of What the Constitution Means to Me, her 2019 Tony Award-nominated play.  This “hilarious, hopeful, achingly human” and incisive play looks at the US Constitution, questioning its foundational principles, its effect on women's rights, its complicated contribution to systemic racism, and in this precarious moment, on our democracy.  After the screening, Heidi will join a conversation hosted by Theatre faculty Len Berkman and Ellen Kaplan. 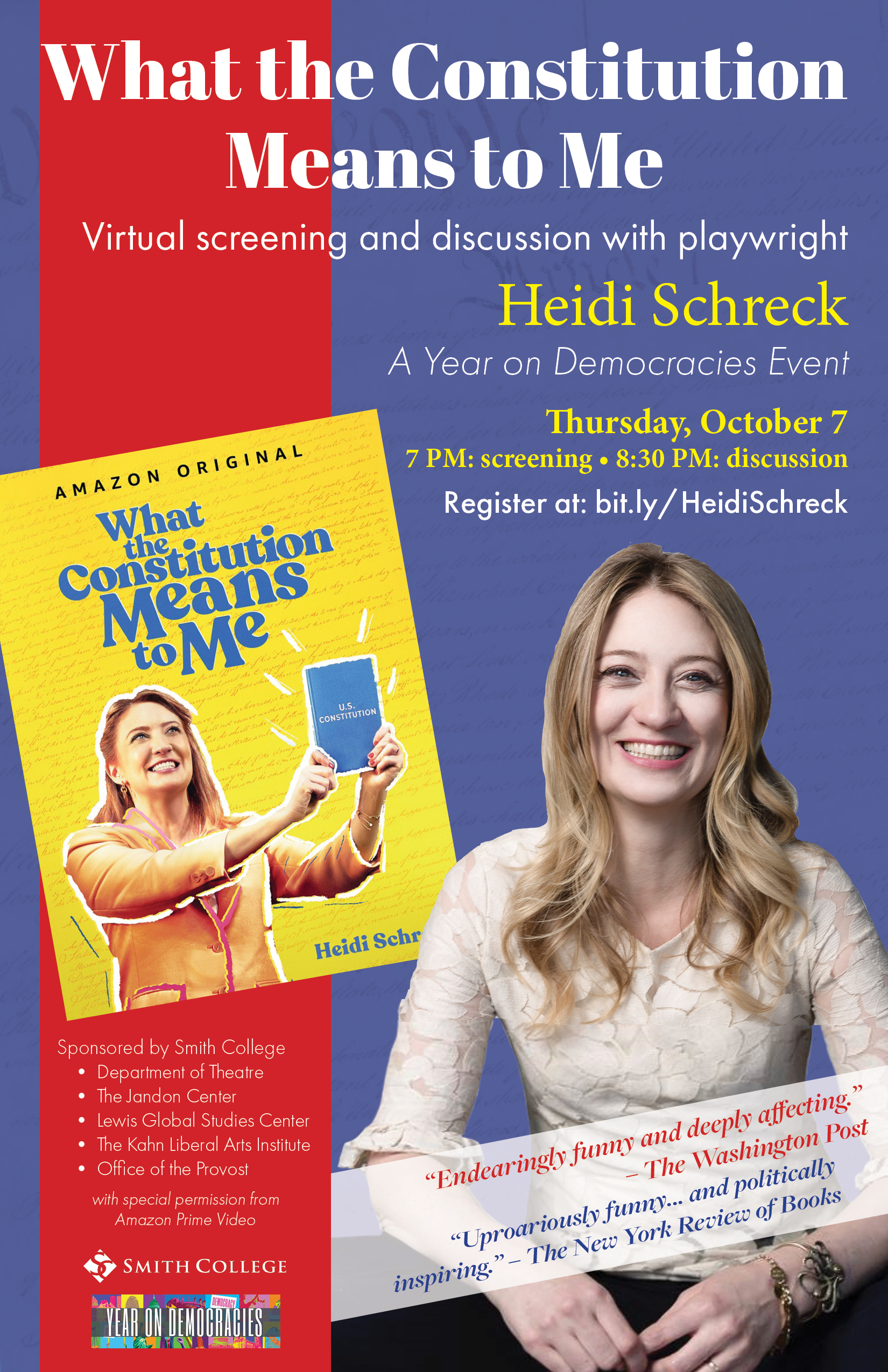