The Sage Chamber Music Society presents Schubertiade: Celebrating the Music of Franz Schubert on Graf fortepiano Sunday, November 7, at 3 p.m. in Smith College’s Sweeney Concert Hall. After postponing in April 2020, during the pandemic, Jiayan Sun and Monica Jakuc Leverett will finally conclude Sun’s Schubert series of the 2020-21 season in a performance of solo and four-hand music by Franz Schubert on a replica of an 1819 Graf piano. The concert will be preceded at 2 p.m. by a discussion and demonstration by the performers and fortepiano builder Richard Hester.

The concert can be attended in person by participants in the Smith and Five College asymptomatic testing programs. A free livestream is available for those who can not attend in person by registering at EventBrite.

The first half of the concert will feature Monica Jakuc Leverett playing the Moments Musicaux, followed by Jiayan Sun playing the Wanderer Fantasy. After intermission, Sun will play the Drei Klavierstücke, and the performers will end with two four-hand duets: Lebensstürme and Rondo in A Major, playing them as if they are a two-movement sonata like Beethoven’s Op. 90.

The piano used in this concert is a 6-½ octave replica inspired by a Conrad Graf instrument of c. 1819 in Goat Castle, near Prague. American maker Paul McNulty, who lives and works in the Czech Republic, built it for Monica Jakuc Leverett in 2003. Its warmth and clarity of sound, and great variety of tone colors (achieved with the use of four pedals), make it particularly suited to the music of Schubert.

Jiayan Sun is an Assistant Professor of Music at Smith College. During the previous four years, he was the Iva Dee Hiatt Visiting Artist in Piano at Smith, where he presented in successive years: the complete sonatas of Beethoven, a series of eight Schubertiades, and a traversal of much of Chopin’s music. Monica Jakuc Leverett is Elsie Irwin Sweeney Professor Emerita of Music at Smith College, where she taught from 1969-2008. 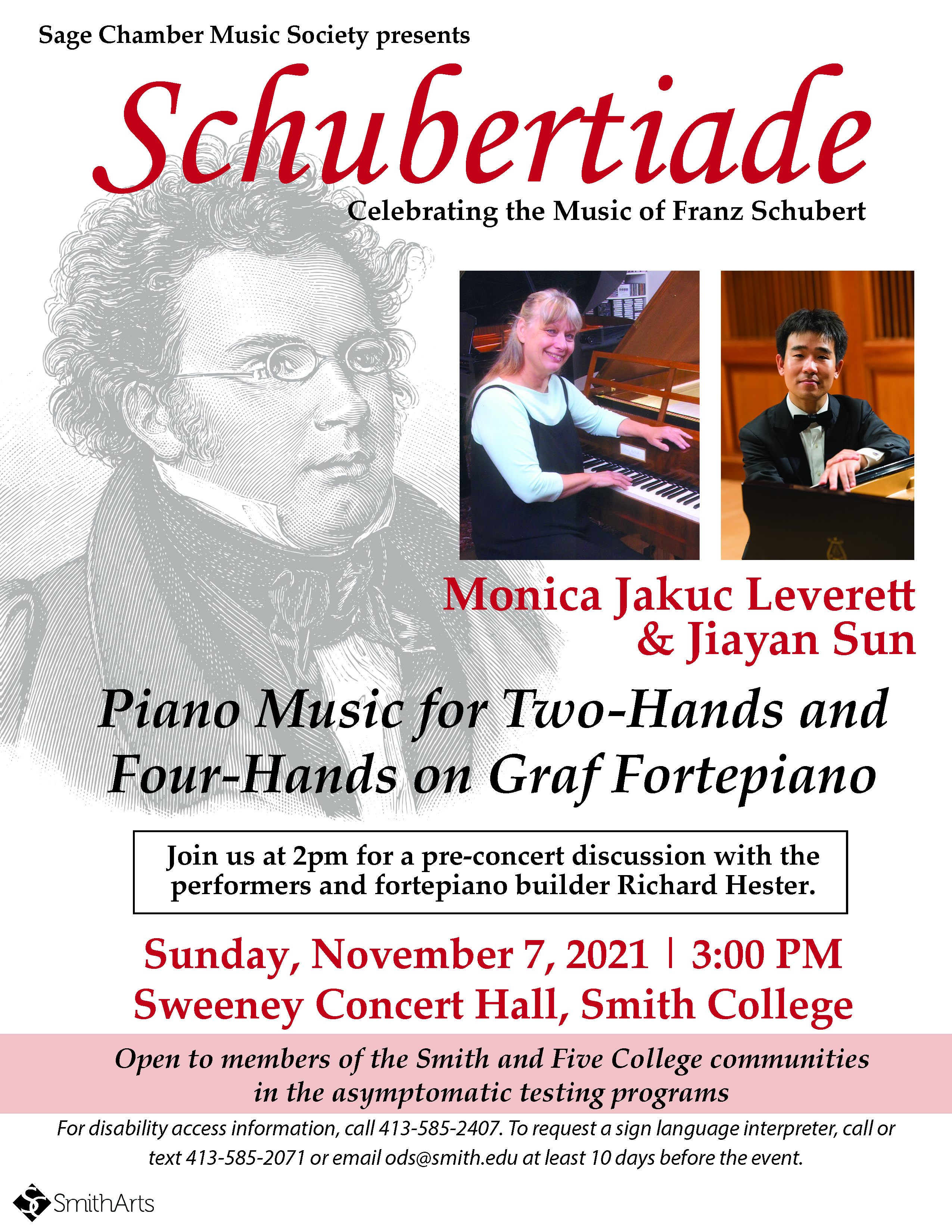