Northampton, MA—The Smith College Department of Music presents a series of concerts to celebrate the 100th birthday of George Walker, the critically acclaimed concert pianist and composer and the first African American to receive the Pulitzer Prize for composition. The series begins Sunday, March 6 at 3 p.m., with a chamber concert featuring violinist Gregory Walker and pianist Lori Walker, the composer’s son and daughter-in-law and continues on April 21 and 22 with two concerts and a panel discussion. All events are free and open to the public in Sweeney Concert Hall.

George Theophilus Walker was a trail blazing musician and composer—the first African American doctorate at the Eastman School of Music (1955), the first Black tenured faculty at Smith (1961–68) and the first African American composer to win the Pulitzer Prize for composition (1996) among many others. While racial prejudice prevented Walker from fulfilling the promise of his career as a concert pianist, Walker established himself as a revered composer. His music has been admired for weaving influences from African-American spirituals and jazz into the modern classical tradition. His nearly 100 compositions range broadly, from intricately orchestrated symphonic works and concertos to intimate songs and solo piano pieces. George E. Lewis, a Columbia University professor of American music, wrote in the Washington Post obituary that Dr. Walker’s music “was all about freedom. His compositions adhered to no school, and did not develop from a singular, iconic style. Each work proceeded from its own premises and found its own way.”

Jonathan Hirsh, senior lecturer and director of orchestral and choral activities at Smith, has assembled a series of events to celebrate not just George Walker’s work, but that of his wife, Helen Walker-Hill ’65MA, a musicologist who spent her career focusing on works by Black women composers. “Not only will we celebrate George Walker’s compositions this year, but also his legacy. Walker’s son, daughter-in-law, and grandson will all participate in the series as performers, a fitting and wholly deserved tribute to a career in music that has not been fully appreciated.”

On April 21 at 5 p.m. there will be a student recital of piano and vocal music from Helen Walker-Hill's Music by Black Women Composers: A Bibliography of Available Scores. Prior to the recital there will be a screening of the film Discovering George Walker by Frank Schramm (2017) and a discussion with Andrea Moore, assistant professor of music at Smith, Gregory Walker, and George Walker’s grandson, the rapper Lightskin Legend at 4 p.m.

The Celebration concludes on Friday, April 22 at 8 p.m. when George Walker’s son Gregory joins the Smith College Orchestra as soloist in the Butterfly Lovers’ Concerto by He Zhanhao and Chen Gang and Lightskin Legend (grandson) performs as soloist in Gregory Walker’s dream n. the hood for rap and orchestra. Also on the program are George Walker’s Lyric for Strings and Dvorak’s Symphony No. 9 “From the New World.” Jonathan Hirsh conducts.

The George Walker Centennial Celebration concerts are performed in Smith College’s Sweeney Concert Hall. The events are free and open to the public with masks and Smith IDs or proof of full vaccination required. For updates check the Smith College Department of Music webpage. 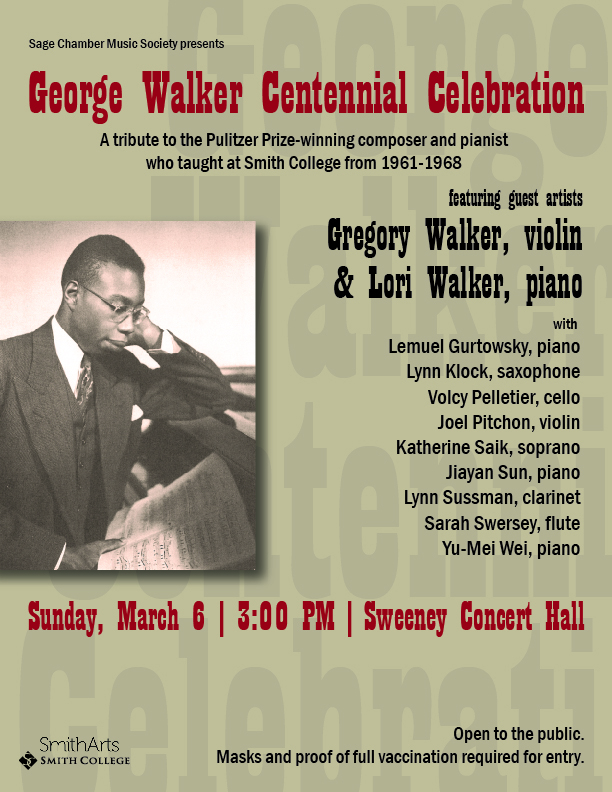