Batty Moves (1995) was created to honor Sarah Baartman, also known as the Hottentot Venus. Baartman, a South African woman, was exhibited as a nude sideshow attraction in Europe during the early 1800s because she was thought by some Europeans to have an unusually large behind. “Batty” is a word used in the Caribbean, meaning “buttocks.” Urban Bush Women calls Batty Moves “a celebration about seeing beauty in all the different shapes, sizes, and shades we  come in.” The restaging of Batty Moves is a Five College Dance project. Former Urban Bush Women member Maia Claire Garrison led the restaging and Shaneeka Harrell, also a former Urban Bush Women member, was the rehearsal director. The piece is double cast with students from every campus for performances at Smith and Amherst College.

Jawole Willa Jo Zollar was awarded a 2021 MacArthur Foundation Fellowship for “using the power of dance and artistic expression to celebrate the voices of Black women and promote civic engagement and community organizing” for 37 years. Zollar founded the Brooklyn-based Urban Bush Women in 1984 as a performance ensemble dedicated to exploring the use of cultural expression as a catalyst for social change. Urban Bush Women seeks to bring untold and undertold histories and stories to light through dance. Five College Dance is excited to bring their groundbreaking work to our community.

Chris Aiken is presenting a new improvised ensemble work, The Pursuit of Happiness, with nine dancers and live music by Smith’s Musician in Dance Jake Meginsky. The piece draws inspiration from the idea that performance improvisation can be an act of creative citizenry that builds a sense of belonging and a commitment to the collective while honoring the differences between the performers. This work considers how the health of our democracy requires an ongoing inquiry into the relationship between freedom, restraint and responsibility to one another and the more-than-human world.

In Reflections, Megan Bonneau McCool has created a pointe work for 8 dancers, neoclassical in style. It is set to the exuberant and reflective third movement of Aaron Copeland’s Sonata for Violin and Piano. McCool was inspired by the challenging musicality of the sonata. “With the dancers’ thematic movement input,” she comments, “we strove to build a ballet that made sense of the music, finding our way through it and with it, carrying subtle themes about separation and coming home.”

Vanessa Anspaugh has devised the structured improvisation Early Mournings for a cast of five dancers. It features live music by Jake Meginsky. Anspaugh describes her work as an investigation into various structures of power and how power lives in and between bodies.

The Fall Faculty Dance Concert will be held in Hallie Flanagan Studio Theatre, Smith College’s black box performance space, as renovations are underway in Theatre 14. Tickets are $5 for Smith/5C students, $5 for Smith/5C seniors 65+, and $10 for Smith/5C adults. The event is open to participants in the Smith and Five College asymptomatic testing programs. Masks and campus IDs are required. Tickets can be purchased online or by emailing BoxOffice@smith.edu. 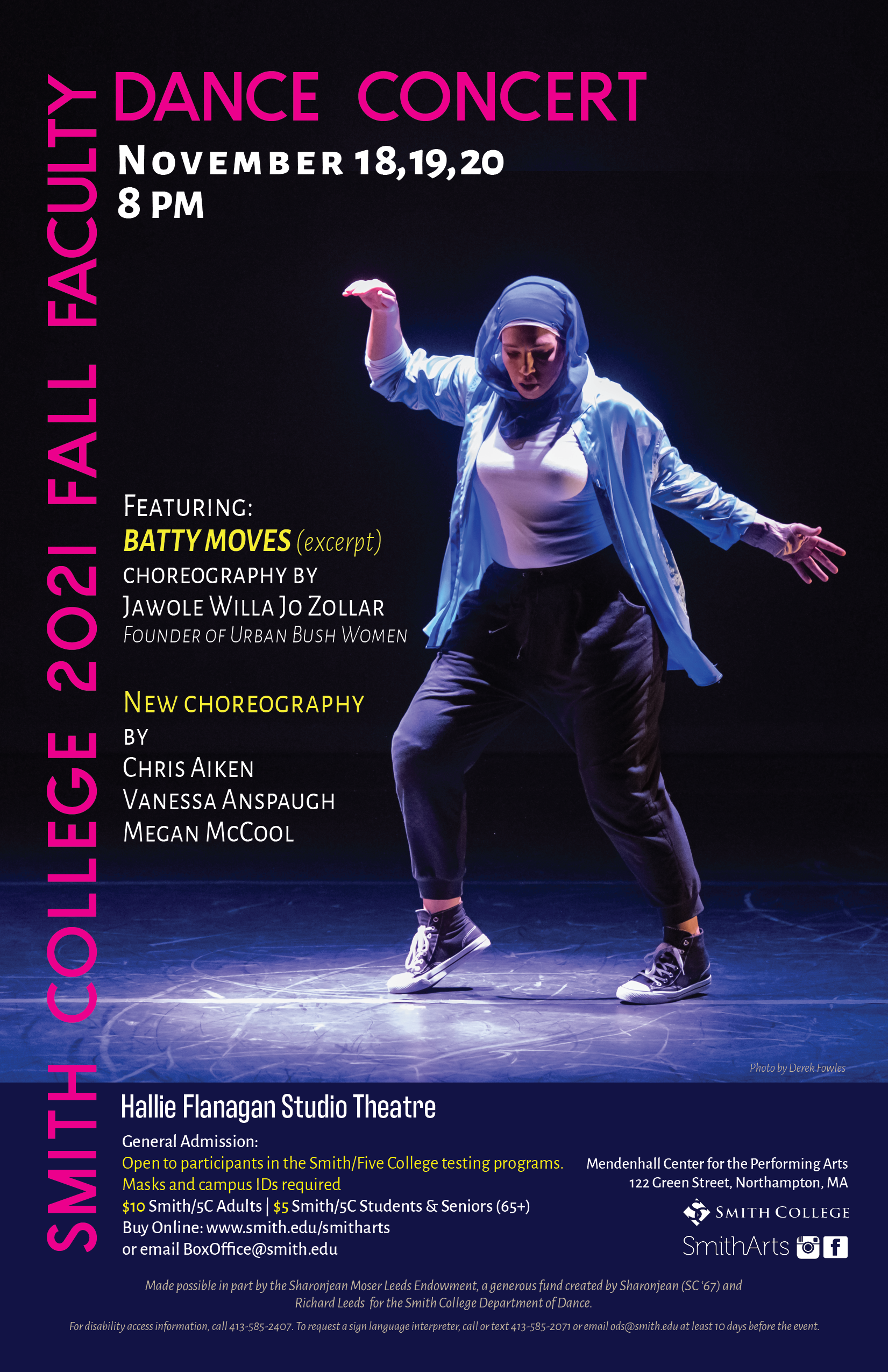