Celebrating the Music of Franz Schubert

The Smith College Department of Music presents Schubertiade, a series of eight concerts celebrating the music of Franz Schubert, featuring pianist Jiayan Sun. The concerts are free and open to the public, on Thursdays at 8 p.m. in Sweeney Concert Hall beginning September 12.

Jiayan Sun wowed audiences last year with A Beethoven Cycle: The Complete Sonatas, a stunning interpretation of the composers’ sonatas presented in chronological order. The SmithArts community was excited to learn that Sun, the Iva Dee Hiatt Visiting Artist in Piano and lecturer in music at Smith College, would be continuing his residency for a third year. “As I was concluding the Beethoven cycle last season, my friends and colleagues were curious to know what my next project would be.” Sun explains, “It seems natural to continue my journey with the music of Franz Schubert.” Sun will explore the music of Schubert in eight solo and collaborative concerts on September 12 and 26, October 24, December 5, February 6 and 27, and April 2 and 16.

A younger colleague of Beethoven, Schubert’s short life overlapped with the illustrious career of the German master. Though Beethoven cast enormous influence on Schubert, the two composers were polar opposites in many ways: Beethoven was an acclaimed piano virtuoso and a celebrated composer, Schubert was largely unknown beyond a small circle of intimate friends; Beethoven was notorious for his fiery temperament and unruly behavior, Schubert was affable and well-liked; Beethoven was a preacher of music while Schubert was a wanderer.

Schubertiade refers to gatherings of Schubert’s devoted circle of friends where the composer shared his music, since it was rarely performed in public venues during his life. Sun explains, “At these events, people were bonded through Schubert’s music: they wandered with his curious heart, they laughed together, they shared each other’s tears… I am eager to delve into this kind of connection with listeners.”

Along with solo recitals, Sun will perform with distinguished musicians from Smith and the Five Colleges: violinist Joel Pitchon and cellist Marie-Volcy Pelletier join in Schubert’s celestial piano trios on September 26 and February 27; tenor William Hite is featured in a song recital on February 6. On December 5, Sun and Judith Gordon present celebrated works for piano four-hands, and Smith student pianists also perform. To get close to Schubert’s sound world, Sun shares the stage with pianist Monica Jakuc Leverett on April 2, performing on a replica of pianos made by Conrad Graf, whose instruments were favored by Schubert.

“Growing up in China, I was exposed to only a few charming Schubert songs. Not until moving to the States as an adolescent did I start exploring Schubert’s huge output.” Says Sun, “I am often approached with this question: who is your favorite composer? I usually answer by reciting my list of half a dozen composers. But I have to say that Schubert occupies a most special place in my heart.”

Praised for his "revelatory" (New York Times) and "technically flawless, poetically inspired and immensely assured playing" (Toronto Star), pianist Jiayan Sun has given recitals and performed with distinguished conductors and orchestras worldwide, including The Cleveland Orchestra, The Hallé, Chinese and RTÉ (Ireland) National Symphony orchestras, Fort Worth and Toledo Symphony orchestras, and the Toronto and Aspen Concert orchestras. His performances have been broadcast on BBC, RTÉ, China Central Television and classical music radio stations in North America. In addition to capturing major prizes in Leeds, Cleveland, Dublin, and Toronto International Piano Competitions, Sun is an accomplished performer on early keyboard instruments. 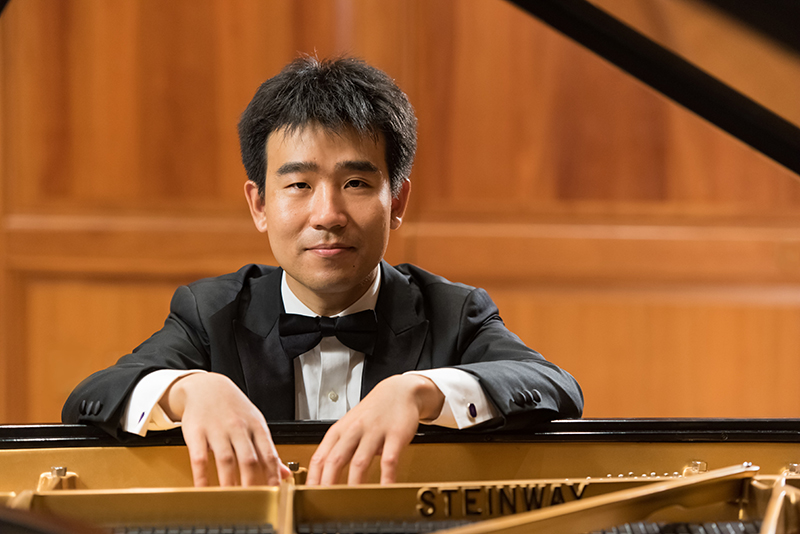