BY Maryellen Stohlman-Vanderveen ’19
Angelica Radke '18 affixes one of the “Shut the Sash” stickers she designed as part of an educational campaign to encourage students and others to close fume hoods in Smith labs.

Angelica Radke ’18 is on a mission to spread an energy-saving campaign she helped launch in Smith chemistry labs this summer.

“An open fume hood costs about four times as much to operate and results in four times the amount of carbon emissions as one with a closed sash,” Radke says. “It’s been estimated that this campaign could potentially save as much as $1,100 per hood annually, assuming those hoods could be kept closed nearly all of the time.” There are approximately 150 total fume hoods on campus.

Students at other colleges and universities across the country have launched successful Shut the Sash initiatives, including campuses in the University of California system. Radke says she was inspired to begin a campaign at Smith after hearing that Margaret Lamb, administrative director of the Clark Science Center, was working with the Office of Campus Sustainability to establish a pilot fume hood program at Smith.

“The goal is to educate and encourage fume hood users to shut the sash window whenever possible for both safety and energy conservation purposes,” Radke says.

“The design of this program was entirely carried out by Angelica—who learned a ton about how to develop a behavior change program,” Weisbord says. “Usually we hit one or two goals in a sustainability project, so getting three is a great result.” 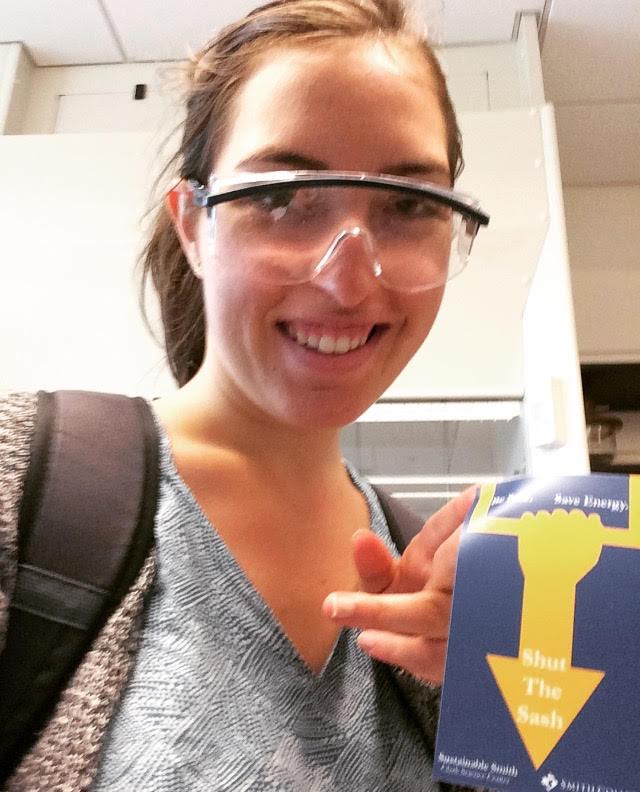 Designing and initiating the campaign involved many components. Radke researched campaigns at other schools and assessed their effectiveness, while also reaching out and collaborating with staff in Smith’s chemistry department, the Clark Science Center and Facilities Management.

In the end, Radke decided on a strategy of designing stickers to place beside fume hoods to remind users to close the sash when they finish working. So far, she has stickered 76 fume hoods in chemistry labs in Ford Hall, and she has also put up flyers and PowerPoint slides around the building.

There are about 20 additional fume hoods in Ford Hall and about 55 elsewhere on campus. The next step in the pilot campaign is to measure the impact of Shut the Sash, Radke says, with an eye to eventually expanding it. Smith custodians have graciously agreed to collect data periodically on the number of open hoods to help gauge the effectiveness of the campaign.

In addition to saving energy, closing those hoods is better for lab safety, says Margaret Rakas, director of laboratory safety and compliance services for the Clark Science Center.

“A fume hood is designed to keep hazardous vapors away from you,” Rakas explains. “The sash, which is like a window, is there to make sure that you’re protected if something goes wrong. Keeping the sash shut means if something happens, you have an additional layer of protection.”

Professor of Chemistry Kevin Shea says he has heard only positive reactions to Shut the Sash from students and faculty in his department.

“Chemistry departments have high carbon footprints because of the hoods,” he says, “We all understand the need for this campaign, sustainability- wise and safety-wise.”

Lamb, administrative director of the Clark Science Center, also has high praise for Radke’s work on the pilot Shut the Sash campaign.

“It is really meaningful that one of our own students has led the effort to look hard at some of our practices and suggest changes that both save energy and make our whole community more mindful of how we can be safe and sustainable in our labs,” Lamb says. “Angelica has done a great job on the project. She’s an excellent listener, thoughtful planner and fun to work with!”

Prof. Dan Gardner weighs in on a new study that shows Chinese citizens still have the leeway to air their environmental concerns and criticize polluters on social media. https://t.co/dzxnH2E2RZ https://t.co/BEsDv4RsAU