Mural artist Robert Evans (left) and Michael Marcotrigiano, director of the Botanic Garden of Smith College, with one of the eight panels that make up the new plant evolution mural at Lyman Conservatory. Photo by Isabella Casini '17.

There’s a new sight to be enjoyed on campus: a plant evolution mural at the Botanic Garden of Smith College.

The 60-foot mural, located in the hallway between the Church Exhibition Gallery and the Palm House at Lyman Conservatory, has been a decade in the making.

At an unveiling ceremony last month, Michael Marcotrigiano, director of the botanic garden, said the project grew out of the longtime desire by botanic garden staff to create a visual display about the history of plants on Earth.

“There are lots of murals that show the evolution of animals, but few if any for plants,” Marcotrigiano noted. “We decided early on that we did not want clinical textbook depictions, but rather a work of art.” 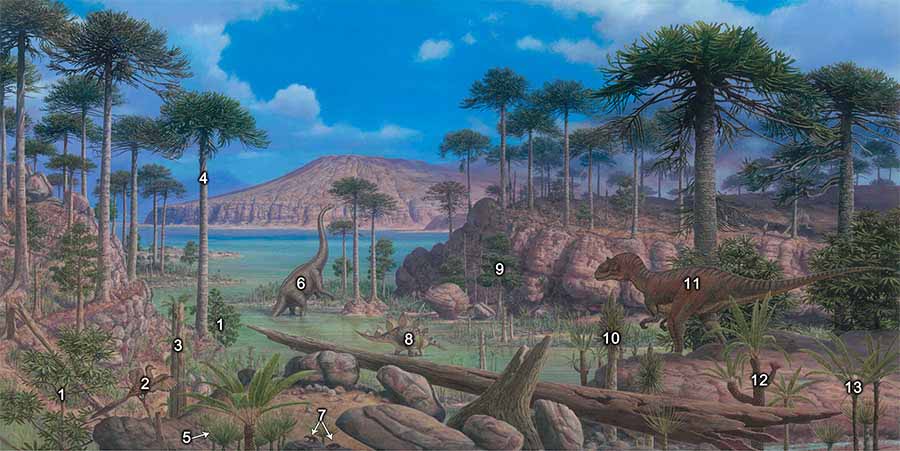 A panel from the new plant evolution mural at the Botanic Garden of Smith College.

The new eight-panel mural by artist Robert Evans shows the evolution of plants beginning more than 3 billion years ago, when oxygen was being introduced into Earth’s atmosphere, to the present day, when human civilization is having a negative impact on plant biodiversity. Each panel depicts a different time period and different forms of plant and accompanying animal life (Hint: Early mammals are very small).

James W. Walker, professor emeritus of biology at the University of Massachusetts Amherst, was scientific adviser to the mural project. The interpretive panels were produced by Marcotrigiano, Madelaine Zadik, manager of education and outreach for the botanic garden, and Jesse Bellemare, assistant professor of biological sciences at Smith.

Evans, the muralist, has done paintings for the Smithsonian Museum and the Museum of Science in Boston, as well as for theater and film. His mural at Smith is his first ever for a botanic garden.

The new plant mural is a work that combines scholarship and a bit of scenic imagination, Marcotrigiano said. He noted that unlike the fossilized remains of animals—which can persist as complete skeletons—plant fossils are generally not found as whole specimens, but in small pieces or as impressions in rock.

“Oh, to have a video camera set up millions of years ago!” Marcotrigiano wrote in an article about the new mural in the latest Botanic Garden News.

Here’s what else Marcotrigiano had to say about the new mural:

How did you get the idea to commission a plant evolution mural for the botanic garden?
“About 10 years ago, I was looking down the empty hallway from our exhibition gallery to the Palm House. I had just visited the Peabody Museum of Natural History in Yale, which has a very famous Age of Reptiles dinosaur mural on the wall, and I started thinking about a plant evolution mural for our botanic garden. My colleague Madeline Zadik came into my office with a copy of the Daily Hampshire Gazette and showed me a picture of a forest scene painted on a state Department of Conservation and Recreation van. The scene was beautifully done. I did some Internet research and found that the artist, Rob Evans, lived outside of Boston. We decided to meet with him to see if he was interested in painting a plant evolution mural at Smith.”

What challenges did you face in mounting the mural?
“We had very limited space in the hallway in which to capture 3.5 billion years of plant evolution. And because that space also gets wet and humid, we could not place actual paintings there. The finished mural was created from digital images that were scanned and reproduced on laminate panels to protect them from light and changing temperatures. The project also was delayed over the years because the muralist is so popular and had other projects to work on. It took so long that a major discovery happened in plant evolution while our mural was being produced, and he had to add a new plant species to one of the panels.”

How did the artist know what to depict in each of the panels?
“I sought out a former colleague, James Walker—who is a paleobotanist from the University of Massachusetts Amherst—to be a consultant to the project. Without him, we would have had to study for years to learn enough to be able to guide the artist in capturing significant moments in plant evolution. Jim put his knowledge to work for this project and proposed eight key periods in plant evolution through the ages. Those became the mural panels you see in the hallway.”

What’s significant about the new mural?
“The mural makes our building, which has a wonderful collection of rare plants, feel more museum-like. It also provides images of plant evolution you can’t find anywhere else. There isn’t another work I know of that teaches about plant evolution in a visual way. I believe it will be a useful teaching tool for biologists, artists, geologists and climatologists. And the mural certainly makes the walk down that hallway to the Palm House more interesting.”

Why is it important to know about plant evolution?
“First of all, plant evolution does not parallel animal evolution, and plants have not experienced as many major extinctions as animals. In addition, stories of plant evolution help inform us about climate change. New studies have shown that plant evolution is often linked to plant migration—like plant species in the Blue Ridge Mountains that, as climate warms, may survive only if their seeds germinate at higher and higher elevations. If those plants become isolated from earlier populations, they may evolve into new species. Since all animals ultimately depend on plants, plant evolution and the processes that drive it are important to understanding all life on Earth.”

‘The Power to Change the Canon’