A weekday lunch at the gluten-free kitchen at Dawes. Photos by Elana Brooks '16.

It’s breakfast-for-dinner night at Dawes, and about 10 Smithies are gathered in the small, colorful dining room, sharing conversation and an evening meal.

Just last semester, many of these same students opted to go without house dinners, making do instead with cold cereal or hastily prepared snacks in their rooms.

The reason? They wanted to avoid contact with gluten proteins found in wheat and other common grains, due to diagnoses of Celiac disease and food allergies.

Although the college had been offering gluten-free menu items in Chase-Duckett’s dining hall, students were concerned that without a kitchen specifically reserved for gluten-free food, they were still coming into contact with problem proteins.

Smith’s new kitchen at Dawes is believed to be the first college dining facility wholly dedicated to gluten-free food. The renovated kitchen serves two hot gluten-free meals daily to students who have registered with the Offices of Student Affairs and Disability Services. Dawes diners also have access to gluten-free breakfast items and snacks from the kitchen via a card-swipe system.

Some Dawes regulars have been diagnosed with Celiac disease, an autoimmune disease caused by a reaction to gluten protein that can lead to digestive tract pain, fatigue and other health problems. Others have food allergies that require them to steer clear of gluten.

Ashley Rohall ’18 was one of a core group of students who successfully lobbied for the new kitchen at Dawes.

“I almost cried when I found out this would be open this fall,” said Rohall, who has been gluten-free for the past five years. “Last year, I almost never had hot meals.”

“Eating with your house is a really important part of being at Smith,” Tayvah said. “It’s been transformative for us to be together.”

Celiacs of Smith began advocating in 2014 for a gluten-free kitchen on campus. Students met with college staff and launched a social media campaign to generate support for the idea.

Those efforts gained traction this past spring, when Kathy Zieja, former director of dining services, suggested using the then-empty Dawes as the site for a gluten-free kitchen. When Zieja retired in June, her successor, Andrew Cox, enthusiastically took up that charge.

Cox, whose wife has Celiac disease, was familiar with the challenges of finding gluten-free menu items and dining settings.

“With this new kitchen, we can really cater to a lot of individual needs in a much safer environment,” Cox said. “A separate kitchen adds a layer of confidence for the students.”

With backing from President Kathleen McCartney and Vice President for Finance and Administration Michael Howard, Dawes renovations began over the summer. New kitchen equipment was installed, including an oven, refrigerator and even a “smoker” for cooking barbecue. A separate dining area was created in the back of the building.

Since the kitchen opened this fall, the number of student diners at Dawes has risen from 16 to 42, Cox said. The college plans to renovate the building’s main dining room over interterm to help accommodate more students next semester. 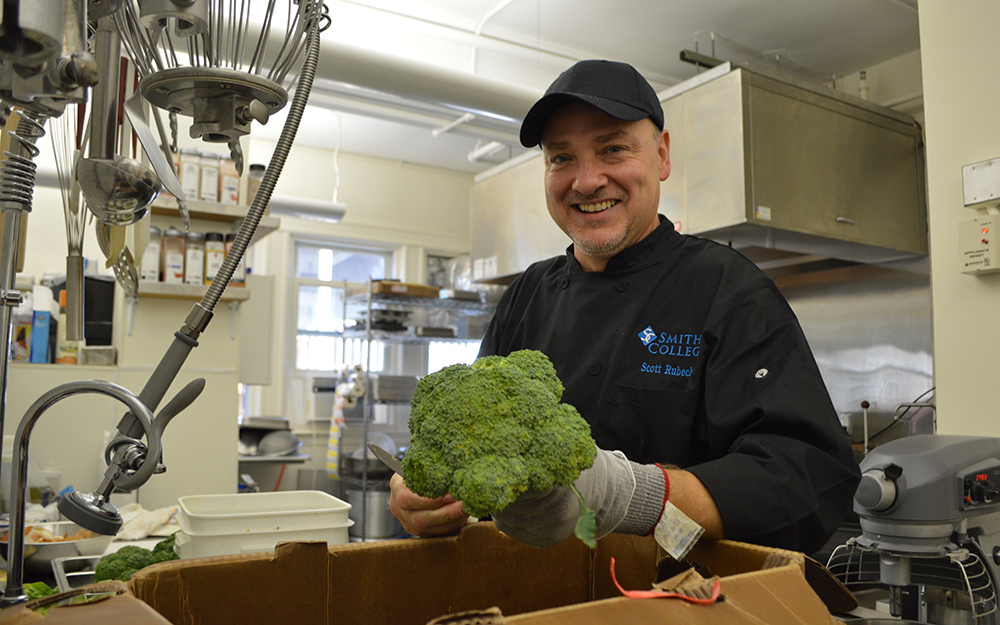 Howard credited the collaboration between students and staff with making the gluten-free kitchen a reality on campus.

“It’s a great example of group problem-solving,” he said. “We felt it was important to meet this need of the students and to make this experience like any other dining experience at Smith.”

Smith senior Elena Karlsen-Ayala said the gluten-free kitchen has transformed her daily life at the college.

“Now I know how it feels to do college as a normal person,” she said. “I haven’t felt this well in a decade.”

Karlsen-Ayala said it’s important for people to understand that for some students, being gluten-free is a medical necessity, not merely a food fad.

Dining services staff say they’ve enjoyed the challenge of creating gluten-free meals, as well as the pleasure of interacting with students at Dawes.

“We’ve come a long way in the past few years,” said Scott Rubeck, who has been a chef at Smith for three decades. “The first gluten-free bread was like a doorstop. We have a lot more options now. I like the creativity part of this.”

Students who lobbied for the new kitchen at Dawes say they are proud that Smith is now a pioneer in gluten-free college dining.

They are also happy to have collective meals back on their daily schedules.

“It was great to come back here after fall break and be around people who have the same experiences and feelings as me,” Rohall said.

“There’s a great sense of community,” Tayvah said. “Dawes will always be my house!”

‘The Most Consequential Work We Can Do’

Taking a comprehensive approach to dismantling systemic racism on campus.

In this, the second of a series of stories about the academic centers that help shape the intellectual life of the college, the Smith Alumnae Quarterly spotlights the Center for the Environment, Ecological Design, and Sustainability (CEEDS).

Entrepreneurial awards, new scientific research and museum leadership positions are among the recent accomplishments of Smith students, faculty, staff and alums. Read about them in the latest People News column.