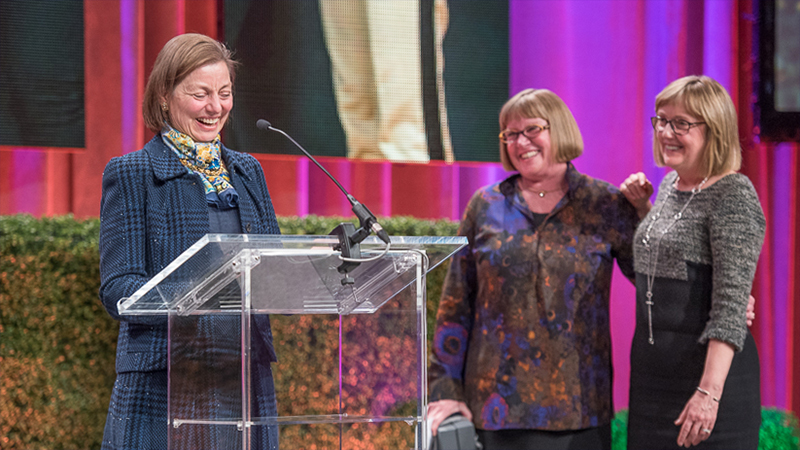 Elizabeth Mugar Eveillard ’69 (left) with Chair of the Board of Trustees Deborah Duncan ’77 and President Kathleen McCartney.

The John M. Greene Award is given by the Board of Trustees to those who have rendered service to Smith College "beyond the call of duty" and who personify the Smith motto, “To virtue, knowledge,” in their service and in their lives.

Since its inception in 1980, the award has been presented to 39 outstanding individuals. Today, we add an extraordinary woman to that distinguished group.

Betty, as an alumna volunteer, donor, trustee and board chair, you made a deep and lasting impact at Smith College and beyond.

During a pioneering 31-year career in investment banking, you forged new paths and broke barriers.

When you joined the Smith board in 2003, you brought formidable analytical, financial, and interpersonal skills. You chaired the board’s finance committee, working closely with the college leadership to ensure that Smith’s fiscal operations balanced fiduciary responsibility with an orientation toward endowment growth and future planning.

Subsequently, you chaired the board’s external affairs committee, navigating with wisdom and skill through controversial public issues ranging from town-gown relations to challenges to single-sex education.

You mentored students, particularly international students, in order to understand how the college could best serve its increasingly global mission. Smith, you have said, always spoke to you of freedom.

Having benefited from your undergraduate study abroad experience in Geneva, you, along with your wonderful husband, Jean-Marie Eveillard, supported Smith’s international programs.

You led by example and with great generosity; your gifts include endowing the directorship of Smith’s Global Studies Center and providing scholarship support for international students.

You played an instrumental role—personally, and through countless donor visits and events—in advancing the Women for the World campaign that we celebrate today. Our ambitious effort, you said at its launch, “represents something bigger than Smith. This is an investment in the future of our world.”

When you became chair of the Smith College Board of Trustees in 2012, you made space for divergent viewpoints, recognizing that open and candid conversation is a bedrock of good governance and a hallmark of a healthy, vital institution. Your tenure as chair coincided with national recognition for Smith’s leadership in access and affordability; record numbers of admission applications; and planning for the reimagining of Neilson Library.

Beyond Smith, you contributed to efforts to advance governance in higher education broadly. You wrote and spoke about board leadership for the Association of Governing Board, highlighting ways that Smith engaged trustees and faculty together in the strategic thinking.

When you stepped down as board chair in June 2016, you left a capped legacy of volunteer leadership that strengthened Smith College immeasurably. Your commitment to inclusive, consultative governance lives on in the many trustees you welcomed, oriented and mentored during your 13 years on the board. A model of grace, civility and reason, you set a new standard for leadership that is ensuring a strong and sustainable future for the college.

Betty, it is with deep gratitude that the Board of Trustees presents to you the John M. Greene Award for distinguished service.You have made a deep and lasting impact at Smith College and beyond—for education, for women, for the world.