Chain Reaction: Chemistry Professor Milton D. Soffer Remembered for His Inspiration In and Out of the Lab

For many students, organic chemistry is the class to avoid at all costs. For one visiting student in the early 1970s, the two semesters of organic chemistry he took at Smith changed his life. With Sophia Smith Professor Milton D. Soffer at the front of the classroom, “it all became logical. It all clicked for me.”

That former student, who wishes to remain anonymous, recently read a Smith publication quoting Soffer — “The aim of pure research is to ask questions in such a way that nature must answer, and answer unambiguously” — and he was inspired to make a gift in Soffer’s honor. Remarked the donor, “I found the quote so appropriate for COVID times.”

The result of that gift is the Professor Milton D. Soffer Endowed Scholarship Fund, which will support chemistry majors. The gift was made through Smith’s Here for Every Voice initiative, which was launched in May 2019 to raise money for scholarship aid. Thanks to the Here for Every Voice Gift Matching Program, anonymously established by a member of the class of 1972, this fund also received an additional $50,000.

A Career That Touched Many 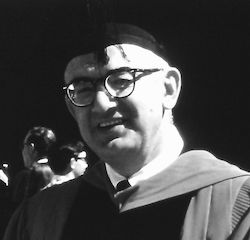 A native New Yorker who completed his undergraduate degree at the University of Arkansas, Milton Soffer received his M.A. and Ph.D. from Harvard University in 1939 and 1942, respectively. At Smith, where he worked for 43 years, he taught organic chemistry and published some 40 academic papers. He was granted tenure in 1950 and became a Sophia Smith professor in 1970.

In 1950, Soffer spent the year at Oxford University as a Guggenheim Fellow, where he worked with 1947 Nobel Prize recipient Sir Robert Robinson. Soffer was also a visiting professor at Hollins College and the University of Massachusetts on the graduate faculty.

For Lale Burk, a native of Turkey who received her master’s degree and Four College Cooperative Ph.D degrees under the direction of Milton Soffer in the 1960s, Soffer was much more than an advisor. “We had a warm, wonderful, enriching relationship,” she says. Burk chose to work with him because of his research focus in the area of synthetic natural products chemistry. Under his guidance, she explored plant-derived molecules, achieving the first laboratory synthesis of some.

Soffer had an active research group, both undergraduate and graduate students, and was close to them. “They loved him," Burk puts it simply. "He helped me form my early ideas about research: the passion for and the beauty of it." Burk’s devotion to studying chemistry was not a passing phase; she eventually spent many years teaching in the chemistry department at Smith as Soffer's colleague.

There had been a relationship between Smith and the American College in Istanbul going back to the 1950s, so a large number of Soffer’s graduate students were Turkish women. Güniz Büyüktür earned her master’s degree in chemistry from Smith College in 1962 and her Ph.D. in the same field from the University of Massachusetts under the Four College Program in 1966. Soffer was her academic adviser for both degrees. “He treated me like a daughter,” she recalls. Soffer even helped Büyüktür get her driver’s license, something uncommon for women in Turkey at that time. He was always interested in helping students learn more about chemistry and loved to teach, Büyüktür recalls. “He really took care of us.”

When Professor Soffer passed in 1985, his former students wrote about him serving as a teacher, a benefactor and a friend. Just as Professor Soffer did for more than 40 years for countless students, the new gift in Milton Soffer’s name will ensure that future generations of women who are passionate about chemistry will be supported and encouraged.

To Make a Gift

If you or someone you know would like to make a gift to the Professor Milton D. Soffer Endowed Scholarship Fund, please contact Associate Vice President for Development Betsy Carpenter ’93 at ewcarpen@smith.edu or 413-585-2052.