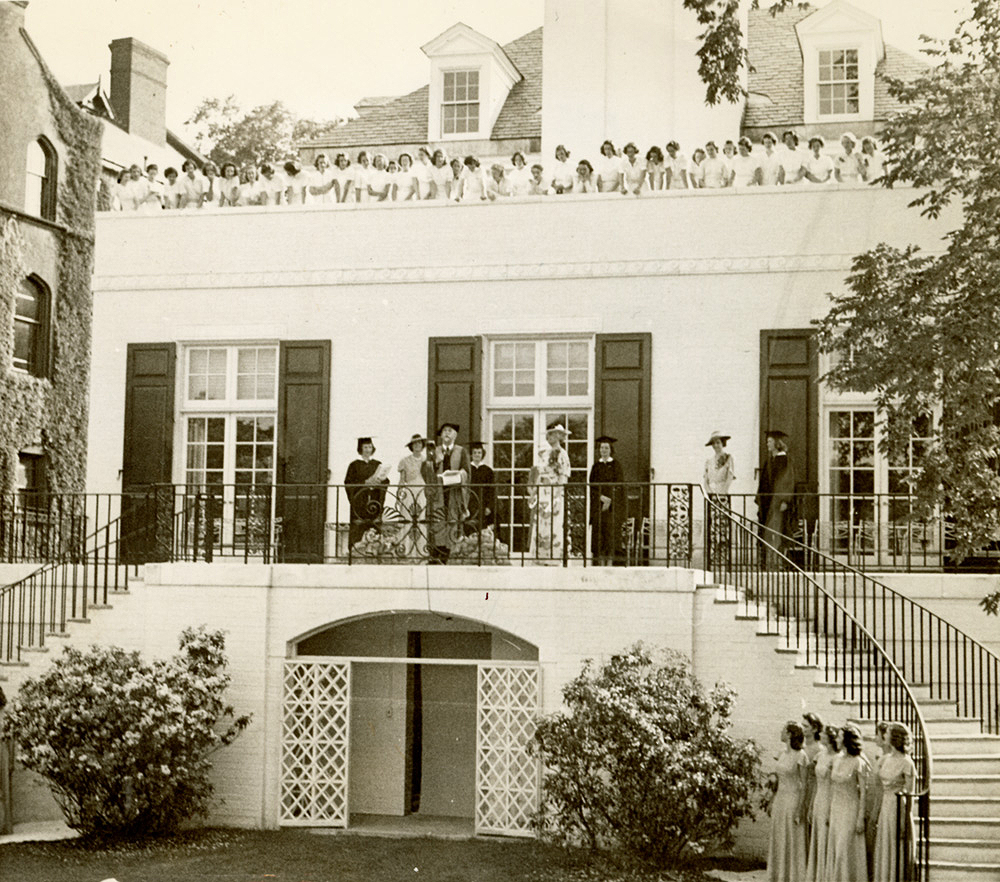 President Neilson speaks from the balcony at the Alumnae House dedication, with Florence Snow to his left. In the background, four seniors in graduation gowns (l to r): Ann Brooks, Clara Rankin, Maude Jacobs and Nancy Zinsser. 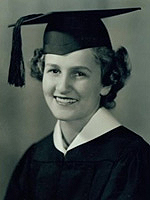 Clara Rankin ’38 (shown at left) remembers the excitement of the Alumnae House dedication on June 18, 1938. The sunny skies and glamorous hats. The speeches. The impressive new Georgian and Neoclassical building that was being celebrated two days before the class of 1938 Commencement.

She was there as president of the student government—one of four seniors formally representing the class—and remembers standing outdoors on the balcony, which served as an impromptu stage, looking down the elegant curved double staircase at the assembled crowd.

“Alumnae House looked so beautiful! Everybody was very proud,” says Clara Rankin, who had watched the white brick building take shape over her senior year. “It fit in so well architecturally—it didn't shout some other architectural design.”

Her strongest memories are of the people. First and foremost was Florence Snow, class of 1904, general secretary of the Alumnae Association, who “was very active and much beloved by everybody.” As a member of many committees related to the Alumnae House project, Snow was deeply involved—she appears in archival video breaking ground in March 1937 as well as meeting with the building’s New York-based architects, Evans, Moore & Woodbridge. Snow’s joy shines through in video from the dedication as she unlocks the new Alumnae House with an enormously oversized key, presented to her by President William Allan Neilson.

President Neilson’s speech also made a lasting impression. “He was really gifted,” Clara Rankin says. “He always put us on our mettle.”

And she fondly remembers another attendee: Bernice Dalrymple, a member of the class of 1910, who would soon become a Smith trustee and later a Smith College Medalist, and whose daughter was a classmate and friend of Clara Rankin’s. “She was a wonderful woman, very energetic and always friendly.”

Clara Rankin delighted in the building’s interior, particularly the “big, light-filled room before you went on the balcony to the steps,” known at the time as the lounge (now called the living room), and the office of Snow, who was a close friend of Clara Rankin’s mother, Edith Smith Taplin, class of 1905. Perhaps the crowning glory for Clara Rankin was the room that her mother and classmates dedicated in the building—a music room, equipped with a piano on the third floor. “I was always so happy that mother, who loved music so much, was able to create this room with friends in her class,” she says. Edith Taplin was a frequent visitor to campus—“She loved those Reunions!” says her daughter—and presumably enjoyed the music room often. Clara Rankin herself enjoys coming back to Smith and to the Alumnae House. Her most recent visit was in 2018, to celebrate her 80th Reunion.

The Alumnae House is currently undergoing renovations that will restore the beautiful exterior, while making the interior more accessible, sustainable and functional. You can learn more about this project, and view archival video (including images of Florence Snow and President Neilson at the dedication, and an unforgettable “bucket brigade” of class representatives hoisting symbolic bags of money up the elegant double staircase), at the Alumnae House project page.

Editor’s note: Clara Rankin nearly missed coming to Smith. She initially set her sights on attending another college so as not to follow in her mother’s footsteps. Life intervened, however, and she prospered at Smith, studying history and becoming a founding member of the Smiffenpoofs. To this day, she is beloved by members of the Smith College Club of Cleveland, in which she remains active.

Learn about other giving opportunities at the Alumnae House project page.