On Friday, April 6, 2018, 52 teams from 34 schools around the country, including 18 teams from Smith College, converged on the Indoor Track and Tennis Facility for the sixth annual Draper Competition for Collegiate Women Entrepreneurs. The competition, sponsored by alumnae Melissa Draper ’77 and her husband, Tim, celebrates all things entrepreneurial, from an entrepreneurs’ career fair, to the annual business venture competition, to new elements this year including virtual reality stations, an augmented-reality experience, food trucks and a battle of the bands. The festive event also featured door prizes, bingo, a balloon artist, a photo booth and an ice cream bar.

Designed to hone the skills that undergraduate women need to advance through the process of idea to venture creation, the competition provides more than $60,000 in cash and prizes, typically including a $10,000 cash prize as well as a Draper University Scholarship for the first-place winner. Draper University’s Hero’s Training is a five-week program that fosters a community of diverse leaders who want to change the world by equipping them with skills, access and resources in Silicon Valley.

The teams so impressed this year's judges that, in a surprise announcement, Melissa and Tim Draper doubled the prize money awarded to the top three teams, bringing the winning team’s prize to $20,000. In addition, all of the finalist teams were awarded $3,000 scholarships to Draper University. Judges this year were Kathleen Curley '72, Melissa Parker Draper '77, Tim Draper, Debby Farrington '72, Dr. Alan Robinson, Mona Sinha '88 and Dawanna Williams '90.

The competition is organized and hosted by the Jill Ker Conway Innovation and Entrepreneurship Center at Smith. 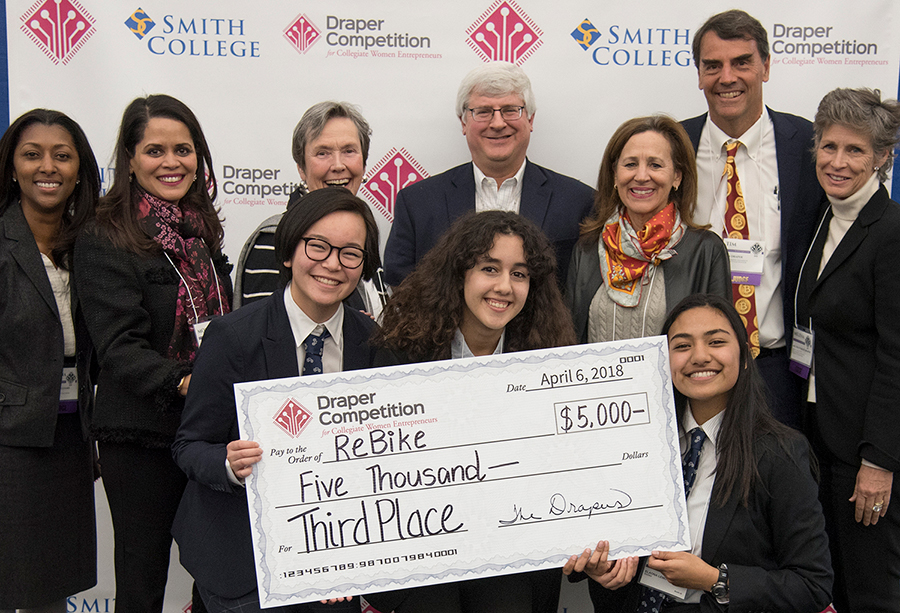 Smith College students Anmei Zhi ’20, Nouhaila Norredine ’20 and Elaona Lemoto ’20, shown with this year’s judges, took third place in the competition and a doubled prize of $10,000 for their venture, ReBike.