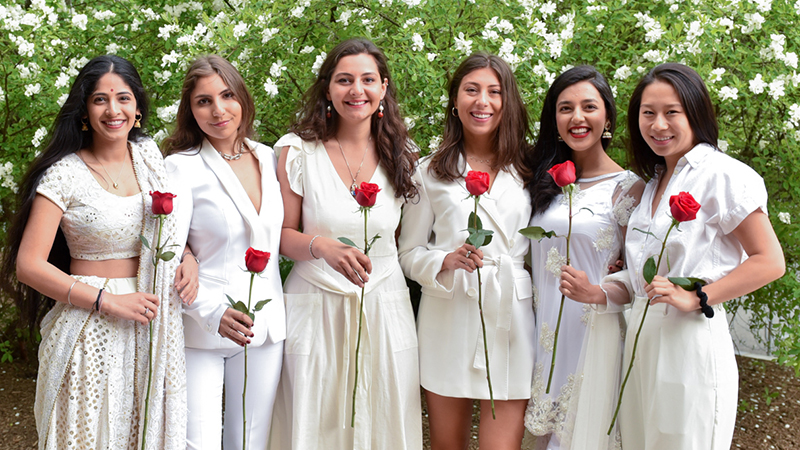 The following prizes were awarded at the Ivy Day Awards Convocation, May 19, 2018.

The Nancy Cook Steeper ’59 Prize to a senior who, through involvement with the Alumnae Association, has made a significant contribution to building connections between Smith alumnae and current students to Madeline Elwell ’18 and Jeoung Eun Lee ’18

The Nancy Boyd Gardner Prize, awarded for a single outstanding paper or other project by a Smithsonian intern during the current year for work related to the Smithsonian Internship Program to Adela Goldsmith ’19

The Phyllis Williams Lehmann Travel Award to a graduating senior majoring in the history of art to be put toward travel to further her studies, with preference given to students interested in pursuing the study of art history, especially classical antiquity, at the graduate level to Samantha Bryce ’18 and Zoe Isabella Mitrisin ’18

The Tryon Prize for Art to a Smith student for installation, performance, video, sound, digital, internet and interactive art at a high level of artistic expression and presentation to Clare Altman ’20, Ratidzo Vushe ’21 and Julia Xu ’19

The Astronomy Department Prize for Excellence in Astronomy and Astrophysics for honors theses, special studies projects, outreach or other educational projects, STRIDE/AEMES projects, especially if they lead to continued involvement in the department, or exceptional performance in classes without any of the above to Rachel Eileen O’Connor ’18

The Sarah Winter Pokora Prize to a senior who has excelled in athletics and academics to Meghan R. Suslovic ’18

The Harriet R. Foote Memorial Prize for outstanding work in botany based on a paper, course work or other contribution to the plant sciences at Smith to Youngjoo Ahn ’18 and Audrey Corbin Gibson ’18

The Mollie Rogers/Newman Association Prize to a student who has demonstrated a dedication to humanity and a clear vision for translating that dedication into service that fosters peace and justice among people of diverse cultures to Ivette A. Viramontes ’18

The American Chemical Society Undergraduate Award in Physical Chemistry for outstanding achievement by an undergraduate student in physical chemistry, and to encourage further pursuits in the field to Emma Florence Gubbins ’18

The American Institute of Chemists/New England Division Prize to an outstanding chemist, biochemist or chemical engineer in the graduating class to Xinyuan Chen ’18

The C. Pauline Burt Prize to a senior majoring in chemistry or biochemistry who has shown high potential for further study in science to Mairead Elizabeth Bartlett ’18, Anisha Tyagi ’18 and Jinyi Yang ’18

The George E. Dimock Prize for the best essay on a classical subject to Allegra Davis ’18

The Chinua Achebe Prize in Comparative Literature to a graduating senior with the highest GPA in courses that count toward the comparative literature major to Molly A. Hurd ’18

The David C. Burres Memorial Law Prize to a senior or an alumna accepted at law school intending to practice law in the public interest to Samira Ruth Haddad ’18

The Barbara Jordan Prize for the Study of Law and Public Policy to a senior or an alumna to Rachel Kaylah Beard ’17 and Beasia Ciara A. Dozier ’17J

The Juliet Evans Nelson Award to graduating seniors for their contributions to the Smith community and demonstrated commitment to campus life to Temar Lee France ’18, Claire Lillian Kerper ’18 and Salma Khan ’18

The Victoria L. Schrager Prize to a senior who has maintained a distinguished academic record and has also taken an important part in student activities to Tiara Ebony Austin ’18 and Beverly Lipsey ’18J

The Andrew C. Slater Prize for excellence in debate to Ella Gagne ’21; for most improved debater to Madeline Turner ’21; and for distinguished service to the team to Catherine Etienne ’18

The Ettie Chin Hong ’36 Prize to a senior major or minor in East Asian languages and literatures with special consideration given to those who have demonstrated leadership and high academic achievement and who seek to pursue a career in education and/or service to immigrant and needy communities to Elizabeth A. Nagy ’18 and Nina Bai Xue ’18

The Mary Maples Dunn Prize, awarded for an essay written in a regular course in the Program in East Asian Studies, to Samantha Elizabeth Bergman ’18

The Larry C. Selgelid Memorial Prize for the greatest contribution to the Department of Economics by a Smith senior to Natalia Janina Kreciglowa ’18 and Lu Liu ’18

The Prize for Distinction in Education and Child Study for a paper, research project, or other meaningful contribu-tion to the field of education and child study to Archer Cleo Meier ’18

The Ford Motor Company Prize for Sustainability to a student who has distinguished herself for her work in support of a sustainable environment to Marcia Rojas ’18 and Amelia W. Wagner ’18J

The Nancy Hellman Prize to the Smith engineering student who has made extraordinary contributions to the advancement of women in engineering to Jenny Banh ’18, Charlotte Katherine Berg ’18 and Shaneil Joy Lafayette ’18

The Adeline Devor Penberthy, Class of 1945, Memorial Prize to an undergraduate engineering major for academic excellence in engineering and outstanding contributions toward building a community of learners within the Picker Engineering Program to Samantha Rose Baierl ’18, Keqin Ding ’18 and Maya Sleiman ’18

The Helen Kate Furness Prize for the best essay on a Shakespearean theme to Liza C. Jeswald ’18J

The James T. and Ellen M. Hatfield Memorial Prize for the best short story by a senior majoring in English to Emma K. Pacchiana ’18 and honorable mention to Kimberly Yujia Liu ’18

The Norma M. Leas, Class of 1939, Memorial Prize to a graduating English major for excellence in written English to Marianna Eleftheria Apostolakis ’18 and Zoe Rose Kriegler-Wenk ’18

The Rosemary Thomas Poetry Prize for the best group of poems to Liza C. Jeswald ’18J and Precious Chika Musa ’18

The Iris Prize is for the work of a graduating senior in film and media studies that shows excellence in a thesis, paper or other major project that is the result of substantial research, innovative thinking and creativity to Alexandra Helen Ostrowski Schilling ’18

The Voltaire Prize to a first-year student or a sophomore for an essay or other project in French that shows originality and engagement with her subject to Clare Altman ’20, Danielle Colburn ’20 and Claire Lane ’20

The Mineralogical Society of America Undergraduate Award for excellence in the field of mineralogy to Casey L. Armanetti ’18

The Dawes Prize for the best under-graduate work in political science to Sarah E. Feldman ’18 and Tianhua Zhu ’18

The Hazel L. Edgerly Prize to a senior honors history student for distinguished work in that subject to Katherine Margaret Krygowski ’18

Office of Inclusion, Diversity and Equity

The Unity Award of the Office of Inclusion, Diversity and Equity to the student who has made an outstanding contribution toward promoting diversity and multiculturalism in the Smith College community to Jeoung Eun Lee ’18 and Traci D. Williams ’18J

The Anacleta C. Vezzetti Prize to a senior for the best piece of writing in Italian on any aspect of the culture of Italy to Camilla Eigen-Zucchi ’18, Naomi T. Jahan ’18 and Angelica Silvana Radke ’18

The Rita Wilkins Award to a senior who has volunteered all four years with a Community Service Organization community partner and who has demonstrated significant leadership and commitment to community service to Su'di M. Abdirahman ’18

The Susan Cohen ’62 and Paula Deitz ’59 Prize in Landscape Studies for excellence in a thesis, paper or project that examines the science, design or culture of the built environment to Jessica McKnight ’19 and Zoe Marie Zandbergen ’18

The LALS Prize to a senior major for an outstanding paper or visual or performance art from any Latin American and Latino/a Studies class to to Liliana Martinez ’18 and Ivette A. Viramontes ’18

The Suzan Rose Benedict Prize to a sophomore for excellence in mathematics to Caira Anderson ’20, Chujun He ’20, Ruoqi Zhang ’20, and  Hening Zheng ’20

The Ann Kirsten Pokora Prize to a senior with a distinguished academic record in mathematics to Samantha Marie Comeau ’18 , Sifan Jiang ’18, Qiaomei Li ’18 and Yixuan Zhang ’18

The Constance Kambour Edwards Prize to the student who has shown the most progress in organ to Bella A. Chou ’18

The Settie Lehman Fatman Prize for the best composition in music in small form to Kyle Allphin ’19, Lisa M. Utzig ’18 and Anwen Wilkerson ’19

The Sarah Hamilton Memorial Prize for the best essay on music to Lisa M. Utzig ’18

The Ernst Wallfisch Prize to a student of music for outstanding talent, commitment and diligence to Yi Ning ’18 and Sophia TenHuisen ’18

The John S. Mekeel Memorial Prize to a senior for outstanding work in philosophy to Chang Liu ’18

The Frank A. Waterman Prize to a senior who has done excellent work in physics to Maya Emma Gilbert Domeshek ’18, Suroor Seher Gandhi ’18, Carson O. Patterson ’18 and Sophia TenHuisen ’18

The William Sentman Taylor Prize for significant work in human values, a quest for truth, beauty and goodness in the arts and sciences to Julianna Rose Calabrese ’18

The James Gardner Buttrick Prize for the best essay in the field of religion and biblical literature to Miles Bond ’20J and Enas S. Jahangir ’18

The Jochanan H. A. Wijnhoven Prize, awarded annually for the best essay on a subject in the area of Jewish religious thought written for a course in the religion department or the Program in Jewish Studies to Hunter Rose Myers ’18

The Arthur Shattuck Parsons Memorial Prize to the student with the outstanding paper in sociological theory or its application to Megan Ashley Cook ’18, Jessica Elianna Feinberg ’18 and Sarah Christine Dibacco Morrison ’18

The Denis Johnston Playwriting Award for the best play or musical written by an undergraduate at any of the Five Colleges to Martha Bongfeldt AC; Nicholas Cummings, University of Massachusetts; and Zoe Rose Kriegler-Wenk ’18

The Jill Cummins MacLean Prize to a drama major for outstanding dramatic achievement with a comic touch in writing, acting or dance to Zoe Margolis ’19 and Tanya Ritchie AC

The Valeria Dean Burgess Stevens Prize, awarded annually by the Program for the Study of Women and Gender and the Project on Women and Social Change for excellent work in the study of women and gender to Gretta Claire Donckers ’18, Izzy Pearl Owen ’18 and Samantha Calli Stolar ’18

The Jeanne McFarland Prize, awarded annually by the Program for the Study of Women and Gender and the Project on Women and Social Change for excellent work in the study of women and gender to Tucker Rose Barker ’18, Molly Rae McGuire ’18, Katrina Schroeder ’19 and Priscilla Takondwa Semphere ’18

The Meg Quigley Prize, awarded annually for the best work in SWG 150 Introduction to the Study of Women and Gender to Emily Ehrensperger ’21 and Christine Qian ’21

The Schuster Van Dyne Prize in Queer Studies, awarded annually by the Program for the Study of Women and Gender for excellent work in queer studies to Zarah Imilda Ferrari ’18