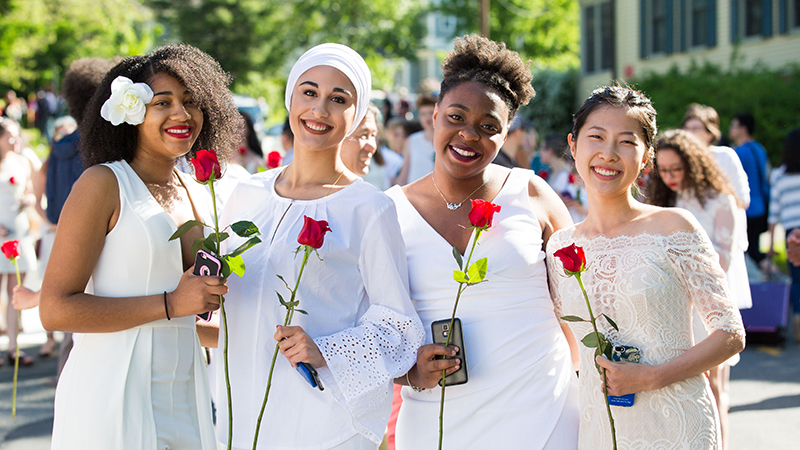 The following prizes were awarded at the Ivy Day Awards Convocation, May 20, 2017.

The Ida B. Wells Prize for Distinguished Work in Africana Studies to a senior for excellence in an essay or other project to Quinn Michael Anex-Ries ’17 and Kayla Ravelle Foney ’17

The Nancy Cook Steeper ’59 Prize to a senior who, through involvement with the Alumnae Association, has made a significant contribution to building connections between Smith alumnae and current students to Doris Lizbeth Juarez ’17

The Eleanor Flexner Prize for the best piece of work by a Smith undergraduate using the Sophia Smith Collection or the Smith College Archives or the rare book room, only if the work itself takes U.S. women as its subject to Clara Kaul ’20

The Nancy Boyd Gardner Prize, awarded for a single outstanding paper or other project by a Smithsonian intern during the current year for work related to the Smithsonian Internship Program to Jenna McCampbell ’18 and Sara Marie Ramasastry ’17

The Phyllis Williams Lehmann Travel Award to a graduating senior majoring in the history of art to be put toward travel to further their studies, with preference given to students interested in pursuing the study of art history, especially classical antiquity, at the graduate level to Saraphina Catherine Masters ’17

The Tryon Prize for Art to a Smith student for installation, performance, video, sound, digital, internet and interactive art of a high level of artistic expression and presentation to Sophie B. Herreid ’17

The Astronomy Department Prize for Excellence in Astronomy and Astrophysics for honors theses, special studies projects, outreach or other educational projects, STRIDE/AEMES projects, especially if they lead to continued involvement in the department, or exceptional performance in classes without any of the above to Mollie R. Pleau ’17

The Harriet R. Foote Memorial Prize for outstanding work in botany based on a paper, course work or other contribution to the plant sciences at Smith to Taryn Mueller ’18

The American Chemical Society Undergraduate Award in Physical Chemistry for outstanding achievement by an undergraduate student in physical chemistry, and to encourage further pursuits in the field to Quinn Michael Anex-Ries ’17

The Connecticut Valley Section of the American Chemical Society Award to a student who has done outstanding work in chemistry, biochemistry or chemical engineering to Megan Elizabeth Neubig ’17 and Yu Zhang ’17

The American Institute of Chemists/New England Division Prize to an outstanding chemist, biochemist or chemical engineer in the graduating class to Allison Rae Hardy ’17 and Jessica Marie Morgan ’17

The C. Pauline Burt Prize to a senior majoring in chemistry or biochemistry who has shown high potential for further study in science to Katherine Anne Blackford ’17 and Megan Marie Wancura ’17

The John Everett Brady Prize for excellence in translation of Latin at sight to Alicia Mae Bowling ’17, Riley E. Kolsto ’20 and Margaret Nolting ’19

The George E. Dimock Prize for the best essay on a classical subject to Allegra Davis ’18

The Julia Harwood Caverno Prize for the best performance in the beginning Greek course to Rose C. Hatem ’20 and Hazel G. Kalderon ’19

The David C. Burres Memorial Law Prize to a senior or an alumna accepted at law school intending to practice law in the public interest to Michelle S. Lee ’16

The Juliet Evans Nelson Award to graduating seniors for their contributions to the Smith community and demonstrated commitment to campus life to Eleanor Midori Adachi ’17, Raven Fowlkes-Witten ’17 and Brittany Deborah-Joy Kott ’17

The Ruth Dietrich Tuttle Prize to encourage further study, travel or research in the areas of international relations, race relations or peace studies to Murong Li ’17

The Victoria L. Schrager Prize to a senior who has maintained a distinguished academic record and has also taken an important part in student activities to Elizabeth N. Haas ’17 and Dorie Sophia Klein ’17

The Andrew C. Slater Prize for excellence in debate to Sushmitha Ram ’18; for most improved debater to Ha Cao ’20; and for distinguished service to the team to Catherine Etienne ’18

The Ettie Chin Hong ’36 Prize to a senior major or minor in East Asian languages and literatures with special consideration given to those who have demonstrated leadership and high academic achievement and who seek to pursue a career in education and/or service to immigrant and needy communities to Lucy Wise Bauer ’17, Kayla Alexandrea Gaskin ’17 and Sarah Margaret Porter ’17J

The Mary Maples Dunn Prize, awarded for an essay written in a regular course in the Program in East Asian Studies to Molly Henry ’19

The Larry C. Selgelid Memorial Prize for the greatest contribution to the Department of Economics by a Smith senior to Jennipher Musa ’17 and Emily Lundberg Utz ’17

The Adeline Devor Penberthy, Class of 1945, Memorial Prize to an undergraduate engineering major for academic excellence in engineering and outstanding contributions toward building a community of learners within the Picker Engineering Program to Eleanor Midori Adachi ’17, Christine Mary Hamilton ’17 and Sara Kacmoli ’17

The Eleanor Cederstrom Prize for the best poem by an undergraduate written in the traditional verse form to Julia B. Smith ’19

The Ethel Olin Corbin Prize to an undergraduate for the best original poem or informal essay in English to Julia Falkner ’19, Ava Goga ’20 and Honorable Mention to Liza Jeswald ’18J

The James T. and Ellen M. Hatfield Memorial Prize for the best short story by a senior majoring in English to Ruth Ellen Allard ’17J and Honorary Mention to Raven Fowlkes-Witten ’17 and Sarah Hanstein Robbins ’17

The Norma M. Leas, Class of 1939, Memorial Prize to a graduating English major for excellence in written English to Mary Ruth Robinson ’17

The Iris Prize is for the work of a graduating senior in Film and Media Studies that shows excellence in a thesis, paper or other major project that is the result of substantial research, innovative thinking and creativity to Erin Batchelder ’17

The Josephine Ott Prize to a junior participating in the Smith Program Abroad in Paris or Geneva for her commitment to the French language and European civilization to Collin Jean Benedict ’17, Zoe Meers ’17, Yuke Wang ’17, Jiaying Xu ’17, Hui Yan ’17, Yu Zhang ’17, and Yingchuan Zhu ’17

The Voltaire Prize to a first-year student or a sophomore for an essay or other project in French that shows originality and engagement with her subject to Tess Abbot ’20, Khulood Fahim ’19 and Ngan Nguyen ’19

The Anita Luria Ascher Memorial Prize to a senior non-major who started German at Smith and has made exceptional progress to Erin Caroline Pratt ’17 and to two senior majors who knew some German when they arrived at Smith and whose progress in four years has been considerable to Alexandra E. Gross ’17 and Monica Annmarie Wilson ’17

The Vera Lee Brown Prize for excellence in history to a senior majoring in history in regular course to Elizabeth N. Haas ’17 and Sara Marie Ramasastry ’17

The Hazel L. Edgerly Prize to a senior honors history student for distinguished work in that subject to Jiaying Xu ’17

The Anacleta C. Vezzetti Prize to a senior for the best piece of writing in Italian on any aspect of the culture of Italy to Sarah Horning Netsky ’17 and Arundhati Saikia ’17

The Susan Cohen ’62 and Paula Deitz ’59 Prize in Landscape Studies for excellence in a thesis, paper, or project that examines the science, design or culture of the built environment to Zoe Dong ’18J, Katya Garcia-Israel ’20, Cameron Hines ’20 and Zoe Zandbergen ’18

The Suzan Rose Benedict Prize to a sophomore for excellence in mathematics to Ojaswi Acharya ’19, Oumayma Koulouh ’19 and Rebecca Rohrlich ’19

The Ann Kirsten Pokora Prize to a senior with a distinguished academic record in mathematics to Kyra Gan ’17, Ellie Mainou ’17 and He Yun ’17

The Christine de Pizan Prize in Medieval Studies to a graduating senior major with the highest GPA in courses used to fulfill the requirements of the Medieval Studies Program to Liberty J. Dupuis ’17

The Ernst Wallfisch Prize to a student of music for outstanding talent, commitment and diligence to Emily Duncan Wilson ’17

The Adelaide Wilcox Bull Paganelli Prize awarded by the physics department to honor the contribution of Adelaide Paganelli ’30, to a senior majoring in physics for exceptional achievement and service to the department to Kira Rachel Chase ’17, Shuyao Gu ’17 and Chloe T. Herrera ’17

The Frank A. Waterman Prize to a senior who has done excellent work in physics to Eleanor Midori Adachi ’17 and Shuyao Gu ’17

The William Sentman Taylor Prize for significant work in human values, a quest for truth, beauty and goodness in the arts and sciences to Elena Alexandra Andreopoulos ’17, Alicia Mae Bowling ’17 and Murong Li ’17

The James Gardner Buttrick Prize for the best essay in the field of religion and biblical literature to Alicia Mae Bowling ’17, Grainne N. Buchanan ’17 and Natalie Manning Mills ’17

The Jochanan H. A. Wijnhoven Prize, awarded annually for the best essay on a subject in the area of Jewish religious thought written for a course in the religion department or the Program in Jewish Studies to Rebecca White ’19

S. Mona Ghosh Sinha Prize for the best paper from any academic discipline, written by a Smith undergraduate on a subject concerning South Asia to Vedica Bhasin ’18 and Mohona Chowdhury ’17

The Clarice Lispector Student Prize for Portuguese to a graduating Spanish and Portuguese-Brazilian major or minor for the best senior essay or project in Portuguese and Brazilian studies to Nashwa Y. Alsharki ’17

The Denis Johnston Playwriting Award for the best play or musical written by an undergraduate at any of the Five Colleges to Sabrina Plon Brier ’17; Meredith Dakata, Amherst College; and Frank Tavares, Amherst College

The Samuel A. Eliot, Jr./Julia Heflin Award for distinguished directing in the theatre to Emma Frances Laube ’17

The Jill Cummins MacLean Prize to a drama major for outstanding dramatic achievement with a comic touch in writing, acting or dance to Siobhan Ann McManamon ’17

The Yvonne Sarah Bernhardt Buerger Prize to the students who have made the most notable contribution to the dramatic activities of the college to Jessie Grace Cole ’17, Kelsey Marie Conti ’17, Zoe Kriegler-Wenk ’18, Emma Frances Laube ’17, Emily Duncan Wilson ’17, Serena Yau ’18

The Meg Quigley Prize, awarded annually for the best work in SWG 150 Introduction to the Study of Women and Gender to Sarah White ’20