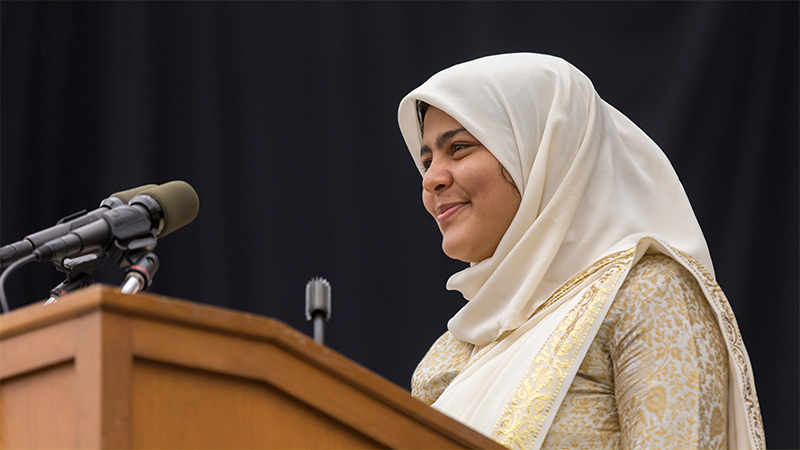 Syeda Zainab Aqdas Rizvi, a member of the Class of 2018, delivered the student speech at Smith College’s Ivy Day celebration on Saturday, May 19.

I am honored to be standing in front of you and telling you about my Smith journey. My name is Zainab Aqdas Rizvi and I am a proud member of the class of 2018. In the audience are my parents, Mama and Baba, and my two younger brothers, Muhammad and Ali, who are visiting Smith for the first time from Karachi, Pakistan. I am the first person in my family to go to college abroad and I would not be standing here without their unwavering support throughout these four years.

I had never visited the United States before applying to colleges, so reputation and word of mouth played a major role in deciding where to apply. At my high school’s career fair, I spoke with Sharmeen Obaid-Chinoy, class of 2002—also here today—and she encouraged me to consider Smith when I expressed an interest in storytelling and journalism. She told me about Smith’s curriculum that encourages taking classes in a variety of disciplines. Soon after, I decided to apply Early Decision. Little did I know that I would fully explore so many diverse options in the curriculum—and go from English to double majoring in computer science and statistical and data sciences.

I still remember the moment I received my acceptance letter. It was in the middle of the night in Karachi, and I had not slept a wink in anticipation of the decision. I logged into the admissions portal and then ran upstairs to my parents to wake them up and tell them the good news. The excitement, however, came with anxiety. I knew I wouldn’t be able to attend Smith without a generous scholarship. I distinctly remember getting on a phone call with the head of Student Financial Services, David Belanger, at 3 a.m. in Karachi and discussing the sprcifics of my family’s financial situation. A few weeks later, I received the second piece of good news—an adjusted financial aid package that would make it possible for me and my family to afford a Smith education.

When I arrived for my first semester, I had already picked out four writing-intensive courses to be “on track” for the English major. My liberal arts adviser said to me, “Zainab, I think you should try at least one STEM course to diversify your course load a little.” Too frightened by the hard sciences and the long labs, I took the Intro to Computer Science course. I found it thrilling and even oddly empowering to write computer programs that would make little fish bounce on my screen. Through the support of tutors, faculty and peers, I was able to overcome my fear of “the sciences” and do well in my first STEM class at Smith.

As part of my work-study position, I was a peer adviser at the Lazarus Center for Career Development. Students around me were getting accepted to internships ranging from start-up organizations to world-class research labs, while I still couldn’t choose a major. But soon, these students began to inspire me. I began to wonder if I could apply for one of these amazing and terrifying opportunities. I applied for an internship at a financial firm in New York City, and when I was accepted for the Technology Summer Analyst position, I got the confidence to challenge myself and commit to computer science as my major.

During my sophomore year, I was inspired to help the community do more to address the wide gender gap that currently exists in technology. And so, with the support of my adviser Professor Nick Howe, I started a Northampton chapter of Girls Who Code—a national movement to introduce school girls to computer science. I also became a computer science teaching assistant which gave me the opportunity to interact with other Smithies who were considering the major.

Last summer, I was ecstatic when I was selected to intern with Google in Mountain View, California; however, my excitement was clouded by nervousness about ongoing immigration issues and work visa restrictions for foreign nationals. I am grateful for Sidnie Davis at Google, Class of 2008, who allayed my fears by working through my options for staying in the U.S. after graduation. This is just one of the many examples set by the Smith community—including current students, faculty, staff and alumnae—where they go out of their way to help each other when unexpected situations arise.

I remember walking into the office of Professor Jordan Crouser, class of 2008, one day in my junior year, saying that I had suddenly realized that I wanted to go to graduate school for computer science. I knew I was behind schedule as I didn’t have any research experience but he encouraged me to maximize the time I had remaining at Smith. He supervised my special studies where we analyzed bias in the Diagnostic and Statistical Manual of Mental Disorders and he gave me individual attention that I would not have received at any other institution. I went on to do an honors thesis with Professor Joe O’Rourke in computational geometry my senior year. This has been one of my most fulfilling academic experiences at Smith. The access to undergraduate research at Smith allowed me to work in two very different and interdisciplinary fields. This summer, I will be working as a research assistant at UPenn before joining full-time as a software engineer at Google. My desire to go to graduate school for computer science is stronger than ever and I feel much more prepared for it.

All of my amazing experiences have been a collaborative effort through the support of the larger Smith community. The friendships I have formed here are perhaps my biggest take-away from my four years. For three out of those four years, I have had the privilege of knowing Gina Fusco at the Lazarus Center who I affectionately call my “Smith mom.” When I was severely ill, surrounded by nurses, and quarantined at Cooley Dickinson Hospital, Gina cradled me in her arms and told me I’d be okay.

I met my best friend—Suroor Gandhi—during the 2016 election watching party. From reading Urdu poetry together to cramming the night before our art history final to arguing endlessly about South Asian politics or who makes chai that is just the right color, Suroor, you have been an extraordinary friend. I hope we can be best friends forever.

The support I have received from Smith has never ceased: from emergency root canals—thank you Dean Caitlin—to teaching me how to thrive in an increasingly uncertain political climate, to making graduate school in computer science a possibility for someone who was too scared to take her first STEM course—the opportunities I’ve had here are more than I could have imagined four years ago. I am even more excited to be part of a network of remarkable Smithies long after I graduate. Thank you and congratulations to the class of 2018.