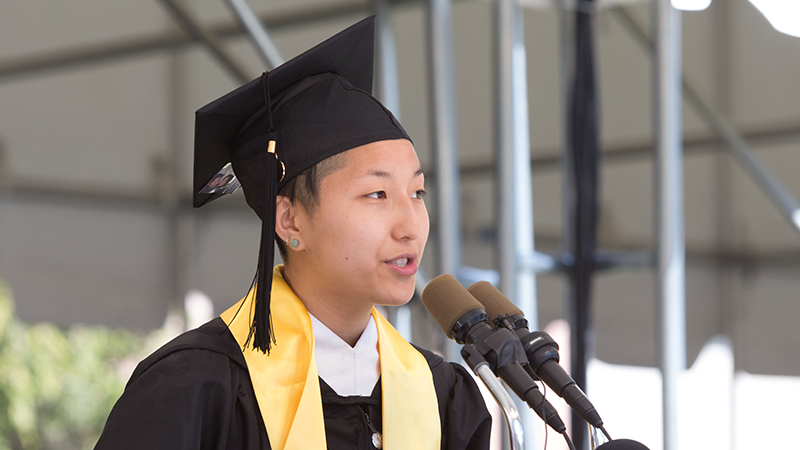 Nahee Kwak, president of the Class of 2014, delivered the student speech at Smith College’s 136th commencement ceremony on Sunday, May 18.

Good morning and congratulations, Class of 2014!

Let me start by thanking our loved ones, our parents, faculty — and for me especially, Professors Carrie Baker and Miliann Kang, staff like Jad Davis in the Alumnae House, and Campus Police Officer Bob Young. We are also grateful to the many Smith students who have influenced our lives over these past few years. Thank you all for the unending support.

Smith has encouraged us to work hard, to be ambitious, and to seek success. But what does it mean to be successful? His Holiness, the Dalai Lama said, “The planet does not need more successful people. The planet desperately needs more peacemakers, healers, restorers, storytellers, and lovers of all kinds.”

During my time at Smith, I was introduced to a story teller named Chimamanda Ngozi Adichie. In her 2009 TED talk, “The Dangers of a Single Story,” Adichie described her experiences in 1996 when she came to an American university at the age of 19. Her roommate was stunned to hear her speak English so well. Because Adichie is Nigerian, her roommate assumed that she couldn’t use a stove and that she listened to “tribal music.” In fact, her roommate was disappointed to learn Adichie’s “tribal music” was Mariah Carey!

This happened to Adichie 18 years ago, but even today, even at Smith, we all know the temptation to see other people, especially those who are different from us, through the lens of a single story. As an immigrant from South Korea, raised in Hawaii and Washington State, I come from a long line of family members who worked at swap meets, flea markets, teriyaki shops, and small convenience stores. At Smith, a place of such privilege and wealth, I have sometimes felt out of place and like people have had a single story of me.

Thirty years ago Smith’s student body consisted of 11 percent women of color, 1 percent international students, and aid was definitely not as generous. Today with 32 percent students of color, 13 percent international, and $58 million in institutional financial aid, Smith has opened its doors to students like me, who may not have had access in the past, and I am grateful.

The diversity of Smith offers the possibility to develop a deeper and broader view of humanity by engaging across the differences of our cultures, nations, religions and wealth. For example, the Weaving Voices Monologues are when students of color share stories to celebrate the journeys they took and the struggles they faced to thrive during their last four years here. It is events like these where Smith has given us the opportunity to move beyond a single story, if we have the courage and commitment to seize it.

As we depart from Smith, I encourage you to continue to seek out multiple stories. The knowledge we gain will enable us to make more ethical choices about the paths we choose — how we continue our education, where we work, and how we will make an impact on the world beyond this campus.

As Smith continues to expose its students to more complex and diverse stories, I believe we can be the people that the Dalai Lama says the world desperately needs — the peacemakers, the healers, the restorers, the storytellers, and the lovers of all kinds.

Thank you, Class of 2014. Congratulations and have fun!