Email: commencement2020@smith.edu
Please contact us for any questions not answered in the FAQ.

Speaker of the U. S. House of Representatives 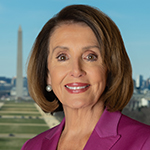 Now in her third term as speaker of the U.S. House of Representatives, Nancy Pelosi is the most powerful woman in American politics.

Known as a tough but compassionate leader and a master of the legislative process, Pelosi has stood firm against political adversaries, unifying the fractious Democratic Party while pushing for legislation to protect society’s most vulnerable members—including women, people of color, workers, children, those with disabilities, immigrants and the LGBTQ population. As the 52nd speaker of the House, she has focused her legislative agenda on the climate crisis, the opioid epidemic and healthcare issues. She has also strengthened consumer protections and fought government corruption.

Pelosi raised five children before she was elected to Congress in 1987 to represent California’s eighth district. In her first speech on the House floor, she addressed the HIV and AIDS epidemic at  a time when the government had been silent on the topic.

Her election in 2007 as the first woman speaker of the House made history. During her initial tenure, from 2007 to 2011, she became a vocal critic of the war in Iraq. When Democrats lost the House in 2010, she became minority leader—once delivering a record-breaking speech, lasting more than eight hours, to protest legislation that failed to protect the children of undocumented immigrants.

In 2019 she regained the speaker position in the midst of a standoff over border-wall funding that resulted in the longest government shutdown ever. She soon became President Trump’s most formidable challenger, even canceling the annual State of the Union address until the opposing side agreed to temporarily reopen the government. Despite her rocky relationship with the president, Pelosi has been able to work productively with some of his closest advisers, recently hammering out a difficult trade agreement and economic stimulus plans to help mitigate the financial effects of the current COVID-19 crisis.

Her unflappable style has proven to be essential in these challenging times. “Fear is never a word used with me,” she said in a recent interview. “I’m never afraid, and I’m rarely surprised.”

President of the College